Grandee of Spain facts for kids 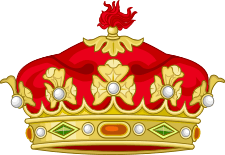 Coronet of a Grandee of Spain 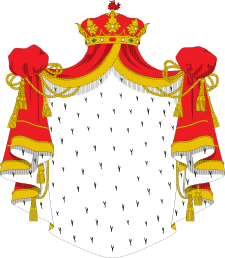 Mantle of a Grandee of Spain

The Grandes de España are the highest ranking members of the Spanish nobility. Their ranks are made up of those nobles holding the most important historical landed titles in Spain. In the modern day, many of these titles overlap or are held by the same person. Strategic marriages have collected titles under certain noble houses over time.

In the modern day, all Grandees have the status 'of the first class'. It implies neither privilege nor power.

An individual is a grandee if he or she holds a Grandeza de España, regardless of possession of a title of nobility. Normally, each grandeza is granted with a title, but this was not always the case. Also, a Grandeza de España is normally awarded along with every ducal title. Several members of both Spanish and French nobility were made Grandees also.

Grandees and their consorts are entitled to the style of The Most Excellent (Spanish: Excelentísimo Señor, male, or Excelentísima Señora, female; abbreviated as Excmo. Sr. or Excma. Sra.). In written form, their names are followed by the abbreviation G de E.

All content from Kiddle encyclopedia articles (including the article images and facts) can be freely used under Attribution-ShareAlike license, unless stated otherwise. Cite this article:
Grandee of Spain Facts for Kids. Kiddle Encyclopedia.