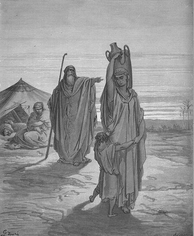 Expulsion of Ishmael and His Mother. Part of Art by Gustave Doré.

Ishmael (Hebrew: יִשְׁמָעֵאל, Arabic: إسماعيل‎code: ar is deprecated إ‎ ʾIsmāʿīl) was the first son of Abraham and , an Egyptian servant. He and his mother had settled in the valley and was the meeting of , nomads of Yemen and descendants of who had also spotted the water source and incorporate. He is the father of the North Arabs.

It was derived from Abraham, descendant of , son of , son of Noah, grandson of Methuselah and coming from line of Seth, son of Adam and Eve, first human.

All content from Kiddle encyclopedia articles (including the article images and facts) can be freely used under Attribution-ShareAlike license, unless stated otherwise. Cite this article:
Ishmael Facts for Kids. Kiddle Encyclopedia.