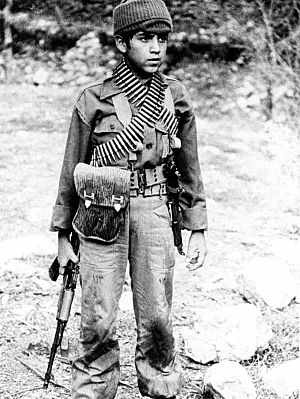 A child soldier in the Iraq-Iran war

A child soldier is a child that takes part to actively fight in a war. There is no official definition. The Coalition to stop the use of Child Soldiers says that no one less than 18 years old should be recruited by regular or auxiliary troops. The age limit of 18 years is taken from the Convention on the Rights of the Child.

UNICEF, terre des hommes and Amnesty International see all the combatants and their helpers that are below 18 years of age as child soldiers.

The Rome Statute of the International Criminal Court says that recruiting people below the age of 15 is a war crime, and must be prosecuted.

According to an UN source, 300.000 children were actively participating in armed conflicts, in 1996.

All content from Kiddle encyclopedia articles (including the article images and facts) can be freely used under Attribution-ShareAlike license, unless stated otherwise. Cite this article:
Child soldier Facts for Kids. Kiddle Encyclopedia.