Culture of Iran facts for kids

The culture of Iran or culture of Persia is one of the oldest in the world. Owing to its dominant geo-political position and culture in the world, Iran has directly influenced cultures and peoples as far away as Italy, Macedonia, and Greece to the West, Russia to the North, the Arabian Peninsula to the South, and South and East Asia to the East.

Thus an eclectic cultural elasticity has been said to be one of the key defining characteristics of the Persian spirit and a clue to its historical longevity. Furthermore, Iran's culture has manifested itself in several facets throughout the history of Iran as well as the Caucasus, Central Asia, Anatolia, and Mesopotamia. 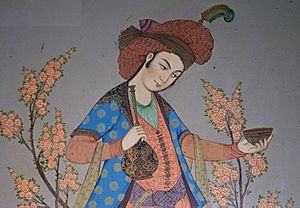 Iran has one of the richest art heritages in world history and encompasses many disciplines including architecture, painting, weaving, pottery, calligraphy, metalworking and stonemasonry. There is also a very vibrant Iranian modern and contemporary art scene.

Iranian art has gone through numerous phases. The Islamic era brought drastic changes to the styles and practice of the arts.

Zoroastrianism was the national faith of Iran for more than a millennium before the Arab conquest. It has had an immense influence on Iranian philosophy, culture and art after the people of Iran converted to Islam. 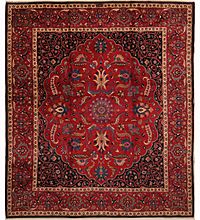 In Iran, Persian rugs have always been a vital part of the Persian culture.

Iranians were some of the first people in history to weave carpets. First deriving from the notion of basic need, the Persian rug started out as a simple/pure weave of fabric that helped nomadic people living in ancient Iran stay warm from the cold, damp ground. As time progressed, the complexity and beauty of rugs increased to a point where rugs are now bought as decorative pieces. Because of the long history of fine silk and wool rug weaving in Iran, Persian rugs are world-renowned as some of the most beautiful, intricately designed rugs available. Around various places in Iran, rugs seem to be some of the most prized possessions of the local people. Iran currently produces more rugs and carpets than all other countries in the world put together. 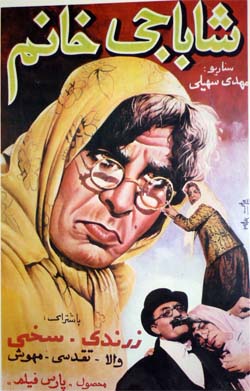 With 300 international awards in the past 10 years, Iranian films continue to be celebrated worldwide.

There is a resurgence of interest in Iranian contemporary artists and in artists from the larger Iranian diaspora.

The music of Persia dates to before the days of Barbod in the royal Sassanid courts. This is where many music cultures trace their distant origins. 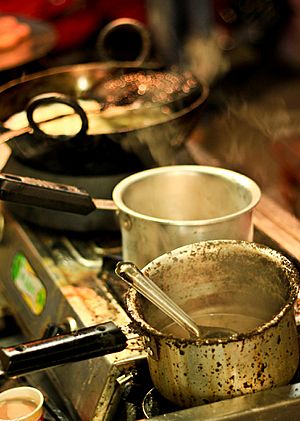 There are countless numbers of traditional tea-houses (chai khooneh) throughout Iran, and each province features its own unique cultural presentation of this ancient tradition. However, there are certain traits which are common to all tea-houses, especially the most visible aspects, strong chai (tea) and the ever-present ghalyan hookah. Almost all tea-houses serve baqleh, steam boiled fava beans (in the pod), served with salt and vinegar, as well as a variety of desserts and pastries. Many tea-houses also serve full meals, typically a variety of kebabs, as well as regional specialties.

The Persian garden was designed as a reflection of paradise on earth; the word "garden" itself coming from Persian roots. The special place of the garden in the Iranian heart can be seen in their architecture, in the ruins of Iran, and in their paintings. 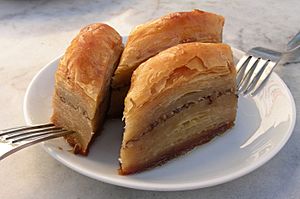 Cuisine in Iran is considered to be one of the most ancient forms of cuisine around the world. Bread is arguably the most important food in Iran, with a large variety of different bread, some of the most popular of which include: nan and hamir, which are baked in large clay ovens (also called "tenurs"). In Iranian cuisine, there are many dishes that are made from dairy products. One of the most popular of which includes yoghurt ("mast")—which has a specific fermentation process that is widely put to use amongst most Iranians.

In addition, mast is used to make soup and is vital in the production of oil. In addition to these dairy products, Iranian cuisine involves a lot of dishes cooked from rice. Some popular rice dishes include boiled rice with a variety of ingredients such as meats, vegetables, and seasonings ("plov") including dishes like chelo-horesh, shish kebab with rice, chelo-kebab, rice with lamb, meatballs with rice, and kofte (plain boiled rice).

Iranian cuisine is famous for its sweets. One of the most famous of which includes "baklava" with almonds, cardamom, and egg yolks. Iranian sweets typically involve the use of honey, cinnamon, lime juice, and sprouted wheat grain. One very popular dessert drink in Iran, "sherbet sharbat-portagal", is made from a mixture of orange peel and orange juice boiled in thin sugar syrup and diluted with rose water. Just like the people of many Middle Eastern countries the most preferred drink of the people of Iran is tea (without milk) or "kakhve-khana". 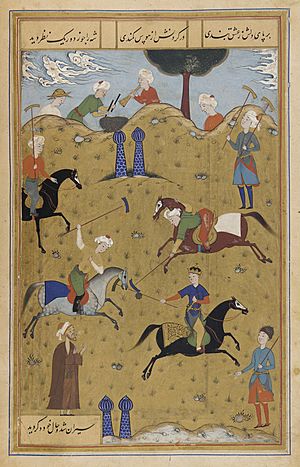 A Persian miniature depicting a polo-match, 1546

The game of Polo originated with Iranian tribes in ancient times and was regularly seen throughout the country until the revolution of 1979 where it became associated with the monarchy. It continues to be played, but only in rural areas and discreetly. Recently, as of 2005, it has been acquiring an increasingly higher profile. In March 2006, there was a highly publicised tournament and all significant matches are now televised. 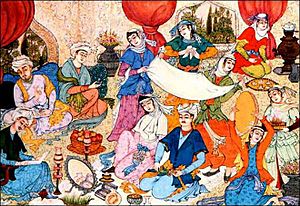 Iranians celebrate the following days based on a solar calendar, in addition to important religious days of Islamic and Shia calendars, which are based on a lunar calendar.

Contributions to humanity in ancient history 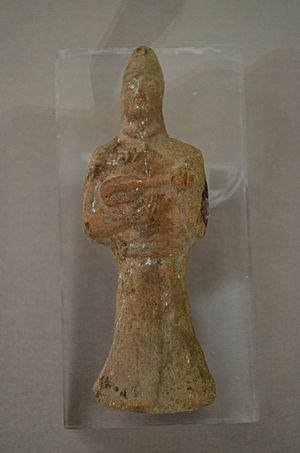 Figurine holding a stringed instrument (early tanbur or lute). First half of second millenium BC. Susa. Kept at the National Museum of Iran 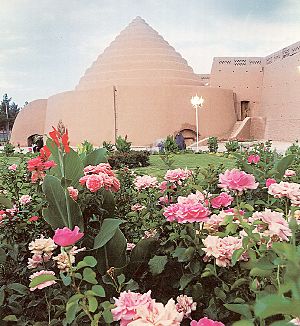 An ancient ice house, called a yakhchal, built in ancient times for storing ice during summers 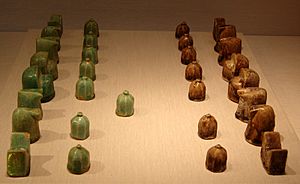 From the humble brick, to the windmill, Persians have mixed creativity with art and offered the world numerous contributions. What follows is a list of just a few examples of the cultural contributions of Greater Iran.

All content from Kiddle encyclopedia articles (including the article images and facts) can be freely used under Attribution-ShareAlike license, unless stated otherwise. Cite this article:
Culture of Iran Facts for Kids. Kiddle Encyclopedia.