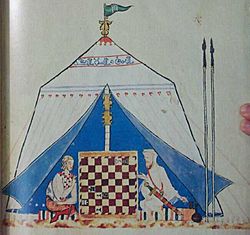 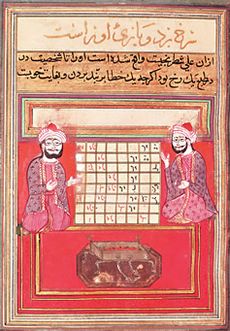 Page from the 14th century Persian manuscript A treatise on chess

Chatrang, or Shatranj, was the name given to the early game of chess when it travelled to Persia and then to the Arab world.

In Sassanid Persia around 600 the name became Chatrang and the rules were developed further, and players started calling Shāh! (Persian for 'King') when threatening the opponent's king, and Shāh māt! (Persian for 'the king is finished') when the king could not escape from attack. These exclamations persisted in chess as it traveled to other lands.

The game was taken up by the Muslim world after the Islamic conquest of Persia, with the pieces largely retaining their Persian names; in Arabic "māt" or "māta" مَاتَ means "died", "is dead". In Arabic, the game became Shatranj. In all other languages, the name of the game is derived either from shatranj or from shah.

One interesting fact is that the Arabs divided their game into the same three stages which we do today: opening, middlegame and endgame.p234

At the start of a game, the Arabic masters took a number of moves before the pieces were in contact with the other side.

"The result of this was that... the final position of the opening was the important one to memorise. Hence in almost all older Muslim chess-works we find... a collection of type-positions, each with its own distinctive name. [These] are recommended to the player as models for his imitation. Diagrams of these type-positions were a regular feature of Arabic chess-works down to the 17th century. These positions were called ta'biya (plural: ta'biyat or ta'abi)... which may be translated as battle-array".p234-5

The following table provides a glimpse of the changes in the names and character of chess pieces, as they passed from one culture to another, from India through Persia to Europe:p221

All content from Kiddle encyclopedia articles (including the article images and facts) can be freely used under Attribution-ShareAlike license, unless stated otherwise. Cite this article:
Shatranj Facts for Kids. Kiddle Encyclopedia.