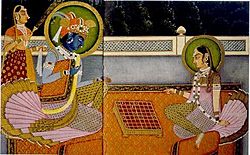 Krishna and Radha playing Chaturanga on an 8x8 Ashtāpada (board)

This precursor of modern chess originated in the northern Indian subcontinent during the Gupta empire. 'Chaturanga' translates as 'the four divisions', meaning infantry, cavalry, elephantry, and chariotry. They were the four divisions of an Indian army at the time, and no doubt the game was thought of as a war-game. At that time the game had no female piece: what we now call the queen was called Mantri, meaning a minister or advisor.

The game eventually spread to the rest of the world after the Muslim conquest of Persia. It was then called Shatranj.

From the beginning until the end of the 15th century the pieces we call bishops and queens had limited movement, and it took longer to get the pieces into action. In modern chess, the original pieces evolved into the modern pawn, knight, bishop, and rook, respectively.p173; p74

All content from Kiddle encyclopedia articles (including the article images and facts) can be freely used under Attribution-ShareAlike license, unless stated otherwise. Cite this article:
Chaturanga Facts for Kids. Kiddle Encyclopedia.