Fairplay is the statutory town that is the county seat and the most populous municipality of Park County, Colorado, United States. Fairplay is located in South Park at an elevation of 9,953 feet (3,034 m). The town is the fifth-highest incorporated place in the State of Colorado. The population was 679 at the U.S. Census 2010. 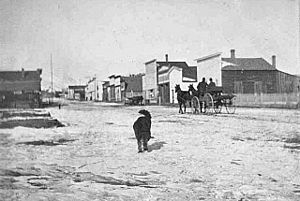 A historic gold mining settlement, the town was founded in 1859 during the early days of the Pike's Peak Gold Rush. The town was named by settlers who were upset by the generous mining claims given to the earliest prospectors and promised a more equitable system for its residents. The town of Fairplay was incorporated in 1872.

It is the largest community in the grassland basin of Colorado known as South Park, sitting on the west edge of the basin at the junction of U.S. Highway 285 and State Highway 9. It is on a hillside just east of the Middle Fork South Platte River, near where Highway 9 ascends the river valley northward to Alma and Hoosier Pass. It is a quiet town, and the roads surrounding it have a low volume of traffic. Although it was founded during the initial placer mining boom, the mines in the area continued to produce gold and silver ore for many decades up through the middle of the 20th century.

The town consists of modern retail businesses along the highway, as well as a historic town on the bluff above the river along Front Street. The northern extension of Front Street along the river has been preserved and has become the site of relocated historic structures as an open-air museum called South Park City, intended to recreate the early days of the Colorado Gold Rush. Most of the residences in town are located on the hillside west of US Highway 285 and east of State Highway 9, in the vicinity of the schools and Park County Courthouse. The majority of the streets in town were finally paved in 2005.

The Town of Fairplay, Colorado, is the visual basis for the Town of South Park, Colorado, in the television series South Park. The people in the show are influenced by Boulder, Colorado, where the creators attended college at the University of Colorado.

From 1966 to 1984, the asbestos-ridden McNamara Building in Fairplay, now demolished, had been the community hospital. It was named for Dr. Edward Bradley McNamara, a former U.S. Army doctor in World War II, who moved to Fairplay in 1962 from Michigan. He died working in the emergency room of his namesake hospital in August 1973. The hospital, built with Hill-Burton Act funds, had financial woes from the start. Before it was condemned and vacated in 2009, it had been used by several successive clinics and by Park County for office space. A previous eight-bed Park County Hospital had operated in Fairplay as early as 1892 and preceded the McNamara Hospital. Both facilities had been mainly for emergencies, obstetrics, and minor surgery, and later for nursing home care.

In 1874, the Presbyterian missionary Sheldon Jackson built in Fairplay the still-standing Sheldon Jackson Memorial Chapel, since renamed the South Park Community Church, a one-room Victorian structure done in Gothic Revival Architecture, which was listed in 1977 on the National Register of Historic Places.

According to the United States Census Bureau, the town has a total area of 1.1 square miles (2.8 km2), all of it land.

There were 259 households out of which 31.7% had children under the age of 18 living with them, 51.0% were married couples living together, 7.7% had a female householder with no husband present, and 34.4% were non-families. 25.9% of all households were made up of individuals and 3.9% had someone living alone who was 65 years of age or older. The average household size was 2.36 and the average family size was 2.79. 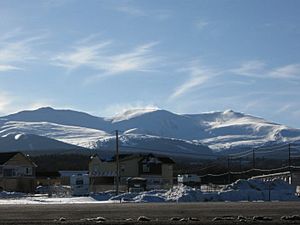 Mountain view to the west of Fairplay

The Burro Days festival is held on the last weekend of July. The event celebrates the town's mining heritage. The main feature of the festival is a 29-mile burro race over rough terrain and approximately 3,000-ft elevation gain from downtown Fairplay to the 13,000-ft summit of Mosquito Pass. Teams consist of one person and one burro. The race takes about five hours to complete; first prize is $1,000. Previously, the first prize included an ounce of gold. There are several other burro races in Colorado, the most notable takes place in Leadville.

The Fairplay event is the World Championship of Burro Racing, an ultra-marathon and the longest burro race in the state. For many years (in the 1960s and early 1970s) the Burro race took place from Leadville to Fairplay, or vice versa, crossing over Mosquito Pass. This followed the route that Father John Lewis Dyer of the Methodist Episcopal Church used for circuit riding and for carrying mail. With time, the rivalry between the two cities ended this cooperative endeavor.

The 64th burro race, held in Fairplay on July 28–29, 2012, despite rain attracted a record crowd of more than ten thousand persons. Llama races are held on the Saturday prior to the Sunday burro run. Burro Days is the major fundraiser for area schools. The 2012 winner of the 29.5-mile long course is George Zack of Broomfield, Colorado, with his burro "Jack." The 2011 winner of the long course, Karen Thorpe of Durango, won the 2012 short course of 14.5 miles. There were fifty-seven entries in the burro contests in 2012.

The town has become mildly famous in recent years as the town depicted in the South Park animated television series on Comedy Central. Although the geographical references contained in several episodes imply that Fairplay is the model for South Park, it is much smaller and more rustic than its fictional counterpart, which has a more suburban character. Co-creator Trey Parker grew up in Conifer and went to high school in Evergreen, both of which are somewhat more affluent mountain communities immediately west of Denver in Jefferson County. Co-creator Matt Stone lived in the Denver suburb of Littleton.

Because the town is a regional center of government and commerce, the term "South Park" has historically been used in the town in the naming of institutions and business, including South Park High School (the namesake of which appears in the series). The elementary school is Edith Teter Elementary and the middle school is South Park Middle School.

Although the town of South Park is based upon the real life town of Fairplay, the latter is mentioned by Gerald Broflovski in the episode "Night of the Living Homeless" and described as "4 miles away" in "Jakovasaurs", which implies that it is a separate town in the show. The county seat offices in Fairplay are seen, though not mentioned by name, in the episode "Stanley's Cup". In "T.M.I." the Pissed Off and Angry Party invade a FedEx Office location which the news reporter reports as the Fairplay FedEx.

A South Park parallel to the Burro race can be found in the "Cow Days" episode.

View of Fairplay and South Park.

All content from Kiddle encyclopedia articles (including the article images and facts) can be freely used under Attribution-ShareAlike license, unless stated otherwise. Cite this article:
Fairplay, Colorado Facts for Kids. Kiddle Encyclopedia.