Kids Encyclopedia Facts
This page is about the city in Quebec. For the town in Malaysia, see Val d'Or, Penang. 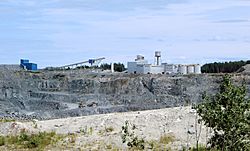 Open pit mine in Val-d'Or. Mining forms a major part of its economy.

Val-d'Or (French pronunciation: [vald‿ɔʁ], IPA: [vald‿ɑɔ̯ʁ]) is a city in Quebec, Canada with a population of 31,862 inhabitants according to the Canada 2011 Census. The city is located in the Abitibi-Témiscamingue region near La Vérendrye Wildlife Reserve.

Gold was discovered in the area in 1923. The name of the town is French for "Valley of Gold." While gold is still mined in the area today, base metals, such as copper (Cu), zinc (Zn), and lead (Pb) have become increasingly important resources. The ore is usually found in volcanic rocks that were deposited on the sea floor over 2.7 billion years ago. They are referred to as volcanic-hosted (or volcanogenic) massive sulphide deposits (VMS).

The city is known for its vast parks, cycle tracks, and forests. Some other attractions include the City of Gold and the mining village of Bourlamaque, which were officially proclaimed historic sites in 1979.

The city hosted the Quebec Games in 1987. The local hockey team, the Val-d'Or Foreurs, have played in the QMJHL since 1993, winning the league championship in 1998, 2001 and 2014 to claim a spot in the Memorial Cup. They play at Centre Air Creebec. The Foreurs' mascot is called Dynamit, named after dynamite which was extensively used by the mining industry of Val-d'Or.

Val-d'Or was once home to CFS Val-d'Or, a Canadian Forces Station.

In the municipal reorganizations of January 1, 2002, Val-d'Or was merged with the neighbouring municipalities of Dubuisson, Sullivan, Val-Senneville and Vassan.

Val-d’Or is situated on the Canadian Shield at an elevation of 1100 feet (330m) above sea level. Although its name refers to a valley (“Val”), the city is actually situated on a vast, slightly undulating plain.

Val-d’Or is at the heart of a vast hydrographic network which includes to the north Lake Blouin, the head water of the Harricana River and to the south Baie Carrière, a reservoir which feeds the Ottawa River.

All content from Kiddle encyclopedia articles (including the article images and facts) can be freely used under Attribution-ShareAlike license, unless stated otherwise. Cite this article:
Val-d'Or Facts for Kids. Kiddle Encyclopedia.