Rouyn-Noranda (2011 population 41,012) is a city on Osisko Lake in southwestern Quebec, Canada.

The city of Rouyn-Noranda is a coextensive with a territory equivalent to a regional county municipality (TE) and census division (CD) of Quebec of the same name. Their geographical code is 86.

The city of Rouyn (named for Jean-Baptiste Rouyn, a captain in the Royal-Roussillon regiment of Montcalm) appeared after copper was discovered in 1917. Noranda (a contraction of "North Canada") was created later around the Horne mine and foundry. Both were officially constituted as cities in 1926, then merged in 1986. 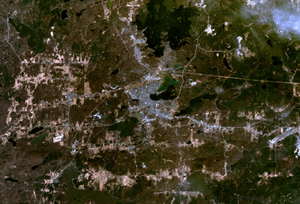 Since 1966, Rouyn and Noranda constitute the capital of the Abitibi-Témiscamingue region. It is also the seat of public university UQAT since 1983.

The population tends to increase or decrease dramatically depending on the economic situation. The city's population dropped by 5 per cent between the 1996 and 2001 census, before increasing slightly by 0.8 per cent for the 2006 census. This more closely parallels the demographic patterns of Northern Ontario than those of Quebec during this period. Rouyn-Noranda also has other cultural affiliations with Northern Ontario, being the only municipality in Quebec that holds a membership in the Francophone Association of Municipalities of Ontario.

The Roman Catholic diocese of Rouyn-Noranda was established on February 9, 1974 by Pope Paul VI, with Mgr. Jean-Guy Hamelin as its first bishop. It is part of the Metropolitan Province of Gatineau. Mgr. Dorylas Moreau was appointed as bishop on November 30, 2001, replacing Mgr. Hamelin. On September 15, 2003, a decree moved the cathedral from Saint-Michel-Archange church to Saint-Joseph church. 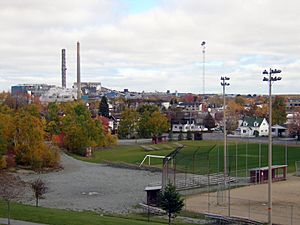 The Horne foundry seen from Sacré-Coeur.

As part of the 2000–2006 municipal reorganization in Quebec, on January 1, 2002 the municipalities (including unorganized territories) of the former Rouyn-Noranda Regional County Municipality amalgamated into the new City of Rouyn-Noranda. These were: Arntfield, Bellecombe, Beaudry, Cadillac, Cléricy, Cloutier, D'Alembert, Destor, Évain, Lac-Montanier, Lac-Surimau, McWatters, Mont-Brun, Montbeillard, Rapides-des-Cèdres, Rollet, and the former Rouyn-Noranda. 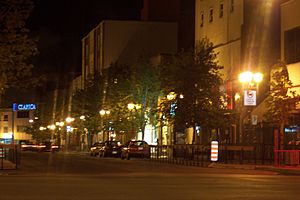 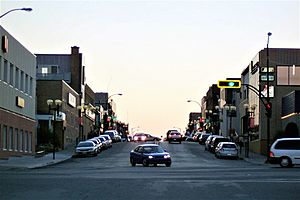 A street corner in Downtown Rouyn-Noranda. 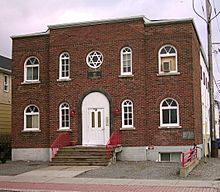 Rouyn-Noranda is known as "La Capitale Nationale du Cuivre" (or the National Copper Capital) for its extensive copper deposits and mining/smelting activities.

The city is served by the Rouyn-Noranda Airport and has a small public transit system of four bus routes serving the urban area.

The primary highways through the city are the north-south Route 101 and the east-west Route 117, which is part of the Trans-Canada Highway system.

All content from Kiddle encyclopedia articles (including the article images and facts) can be freely used under Attribution-ShareAlike license, unless stated otherwise. Cite this article:
Rouyn-Noranda Facts for Kids. Kiddle Encyclopedia.