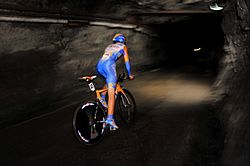 The Cité de l'Or ("The City of Gold") is an attraction located in Val-d'Or, in the Abitibi-Témiscamingue region of Quebec, Canada. It has been operating since 1995 as a place where people can see what gold mining was like by touring the underground Lamaque gold mine and the Bourlamaque historic mining village. Bourlamaque was declared a provincial historic site in 1979 and a National Historic Site in 2012.

Since 2000, one stage of the Tour de l'Abitibi takes place in the underground mine, some 300 feet (91 m) below ground. Cyclists must ride through the tunnels and up the access ramp (a 17% slope) before they race through the streets of Val-d'Or.

The Museum is affiliated with: CMA, CHIN and Virtual Museum of Canada.

All content from Kiddle encyclopedia articles (including the article images and facts) can be freely used under Attribution-ShareAlike license, unless stated otherwise. Cite this article:
Cité de l'Or Facts for Kids. Kiddle Encyclopedia.