Saqqez (Kurdish: سەقز, Persian: سقز) is a city in the west of Iran. According to 2006 census, 131,348 people lived there. Saqqez is famous because of its ancient history and the remaining of a historic fort located on north-east of the city, named "Zehweeya".

Some of the native people that the name "Saqqez" derived from the name of an old Scythians empire, located around ancient Saqqez, as in Kurdish this people pronounce the name as "Saakaa". 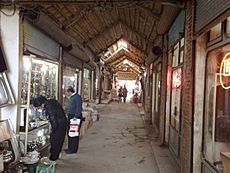 The Jewish bazaar in Saqqez.

People of Saqqez are Kurds and speak in Kurdish language, they also speak in Persian which is the official language of Iran. Most of the people are following Islam. In recent years there was a huge community of Sufies in Saqqez, they still exist in little numbers and do their spiritual rituals in special places named Tekkyeh (in Kurdi: تەکیە).

All content from Kiddle encyclopedia articles (including the article images and facts) can be freely used under Attribution-ShareAlike license, unless stated otherwise. Cite this article:
Saqqez Facts for Kids. Kiddle Encyclopedia.