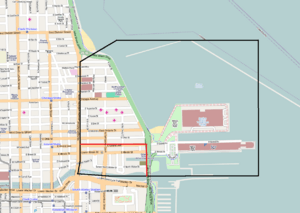 Most sources support the black Streeterville borders as shown above, but the City of Chicago officially only includes the smaller region inside the red borders. 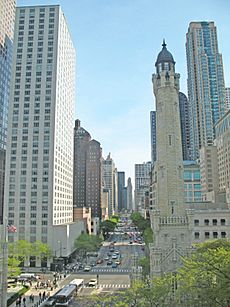 The Magnificent Mile is generally considered the western boundary

Streeterville is a neighborhood in the Near North Side community area of Chicago, Illinois, United States, north of the Chicago River. It is named for George Streeter.

The majority of the land in this neighborhood is sandbar.

All content from Kiddle encyclopedia articles (including the article images and facts) can be freely used under Attribution-ShareAlike license, unless stated otherwise. Cite this article:
Streeterville Facts for Kids. Kiddle Encyclopedia.