Kids Encyclopedia Facts
This page is about a polytechnic undergraduate college in Canada. For a preschool to college institution in the Philippines, see San Agustin Institute of Technology.

SAIT's main campus is located on 16 Avenue NW, overlooking the downtown core of Calgary and is served by the CTrain light rail system. SAIT has three other campuses located in Calgary:

Through the generous support of donors, SAIT offers over $5 million in awards to students in almost every program. Awards are available to all qualifying SAIT students in recognition of academic success, financial need, community involvement and other areas of success and support.

Heritage Hall is one of the central buildings and a historical site on the SAIT campus.

Construction began on Heritage Hall on January 18, 1921, five years after the Provincial Institute of Technology and Art (PITA) was formed in Calgary in 1916. Designed by Alberta provincial architect Richard Palin Blakey and built by J. McDiarmid Company of Winnipeg, the three-story modern structure's focal point is the central entrance flanked by two large towers designed with the characteristics of Collegiate Gothic architecture, which was prevalent throughout North America at the time. Despite the prevalence of Collegiate Gothic architecture in post-secondary education, Heritage Hall is the only example in Calgary. Heritage Hall would be completed later in 1922 and would accommodate both the PITA and the Calgary Normal School. During the Second World War, the structure was used as a wireless training school for the British Commonwealth Air Training Plan. The structure was intentionally situated on Calgary's North Hill to maximize the structures visibility throughout Calgary, and also provide a view of the city from the building. The building was originally known as the "Provincial Institute of Technology Building and Normal School" and was renamed "Heritage Hall" in 1985.

On May 31, 1985, the Government of Alberta designated Heritage Hall a Provincial Historic Resource under the Historical Resources Act. The citation for the historical designation notes the integral role the structure and SAIT played in the development of post-secondary education in Alberta, and the significant architectural value of the Collegiate Gothic design.

On June 24, 1987, the Government of Canada designated Heritage Hall a National Historic Site under the name "Heritage Hall - Southern Alberta Institute of Technology National Historic Site of Canada". The federal designation notes the importance of the structure and SAIT as a place in the development of vocational education in Western Canada. The designation only references the footprint of Heritage Hall and not the entire SAIT campus.

SAIT Residence has two modern high rises located in the northeast corner of its main campus. 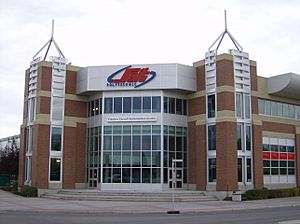 SAIT has been a member of the Alberta Colleges Athletic Conference since 1964. The SAIT Trojans are represented basketball, curling, soccer, cross country running, hockey and volleyball. All of SAIT's sports teams share the name Trojans.

In 2021, SAIT’s School of Business was one of three Canadian schools to make the top 100 of CEOWORLD Magazine’s Best Business Schools in the World for 2021, SAIT ranked #52 overall.

All content from Kiddle encyclopedia articles (including the article images and facts) can be freely used under Attribution-ShareAlike license, unless stated otherwise. Cite this article:
Southern Alberta Institute of Technology Facts for Kids. Kiddle Encyclopedia.