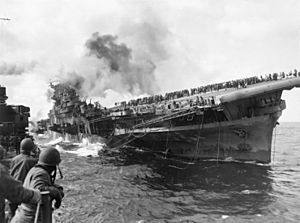 An offensive is an aggressive military operation usually aimed at an enemy force. It is also called an attack, an advance or an invasion. An offensive can be conducted on land, at sea or in the air. A common goal of an offensive is to engage the enemy in a battle. It can also be used to get an enemy to withdraw and avoid a battle.

A tactical offensive is an operation that is usually smaller or more limited. It often involves the use of Special forces (or specialized forces). It often has a limited task such as the capture of a bridge or stronghold. A strategic offensive usually involves larger forces and usually has long-range goals.

All content from Kiddle encyclopedia articles (including the article images and facts) can be freely used under Attribution-ShareAlike license, unless stated otherwise. Cite this article:
Offensive (military) Facts for Kids. Kiddle Encyclopedia.