Creuse (Occitan: Cruesa) is a department in central France in the region of Nouvelle-Aquitaine. It is named after the Creuse river that flows through the department.

Creuse is one of the 83 French departments made during the French revolution, on 4 March 1790. It was created mainly with lands of the old province of County of La Marche.

In 1800, with the creation of the arrondissements in France, the seven districts were changed into four arrondissements: Guéret, Aubusson, Bourganeuf and Boussac.

On 10 September 1926, the arrondissements of Bourganeuf et Boussac were eliminated. 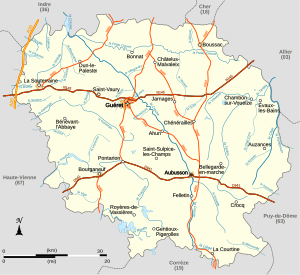 Map of the Creuse department

The department is surrounded by 6 departments in 3 regions:

The main river in the department is the Creuse, a tributary of the Vienne river and that gives its name to this the deparment; it flows through the department from the southeast to the northwest.

The department is managed by the Departamental Council of the Creuse in Guéret. Creuse is part of the region of Nouvelle-Aquitaine.

There are 2 arrondissements (districts), 15 cantons and 258 communes (municipalities) in Haute-Vienne.

The following is a list of the 15 cantons of the Creuse department (with their INSEE codes), in France, following the French canton reorganisation which came into effect in March 2015:

The inhabitants of Creuse are known, in French, as Creusois (women: Creusoises).

Evolution of the population in Dordogne

All content from Kiddle encyclopedia articles (including the article images and facts) can be freely used under Attribution-ShareAlike license, unless stated otherwise. Cite this article:
Creuse Facts for Kids. Kiddle Encyclopedia.