Aubusson (Occitan auvergnat: Le Buçon, formerly Aubuçon) is a commune of the Creuse department in central France, in the Nouvelle-Aquitaine region.

In 1790, when the departments were created, Aubusson was named as district of the Creuse department and an arrondissement in 1800.

The commune of Aubusson is in the southern part of the department, at the confluence of the Creuse river and its tributary the Beauze river. The city is at the northeastern end of the Millevaches plateau.

Aubusson has an oceanic climate with relatively hot summers, mild winters and abundant rainfall, Cfb in the Köppen climate classification.

The inhabitants of Aubusson are known, in French, as Aubussonnais (women: Aubussonnaises).

Evolution of the population in Aubusson 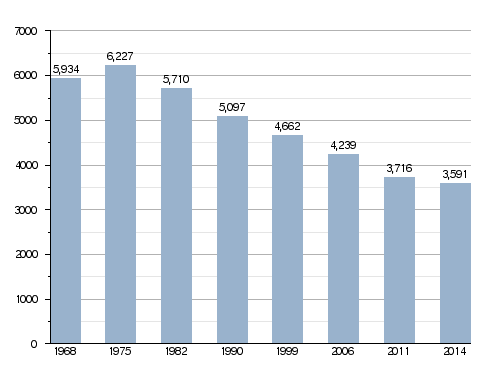 Aubusson is the subprefecture of the Creuse department, the capital of the arrondissement of Aubusson and the administrative centre (French: chef-lieu) of the canton of Aubusson, with 9,437 inhabitants (2014).

Aubusson is well known for its tapestry and carpets, which have been famous throughout the world since the 14th century. Its origins were born with the arrival of weavers from Flanders, who moved to Aubusson around 1580. There is a famous collection of Aubusson tapestries at Vallon-Pont-d'Arc.

All content from Kiddle encyclopedia articles (including the article images and facts) can be freely used under Attribution-ShareAlike license, unless stated otherwise. Cite this article:
Aubusson, Creuse Facts for Kids. Kiddle Encyclopedia.