Colleville-sur-Mer is a commune in the Calvados department in Normandie region in northwestern France.

It was originally a farm owned by a certain Koli, a Scandinavian settler in the Middle Ages. It shares the same etymology as the other Colleville in Normandy. During the conquest of England by William the Conqueror or following it, Gilbert de Colleville was given lands in England, it was from this Knight that the modern de Colville/Colvin family would develop, including Clan Colville in Scotland and the Barony de Colville, of Castle Bytham in England.

The beach next to the coastal village was one of the principal beachheads during the Normandy landings on 6 June 1944, designated Omaha Beach. 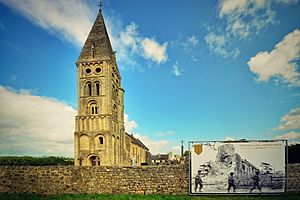 All content from Kiddle encyclopedia articles (including the article images and facts) can be freely used under Attribution-ShareAlike license, unless stated otherwise. Cite this article:
Colleville-sur-Mer Facts for Kids. Kiddle Encyclopedia.