Southwick House is a Grade II listed 19th-century manor house of the Southwick Estate in Hampshire, England, about 5 miles (8 km) north of Portsmouth. It is home to the Defence School of Policing and Guarding, and related military police capabilities.

The house was built in 1800 in the late Georgian style, to replace Southwick Park house. The three-storey house is distinct for its two-storey foyer lit from a cupola, and a series of elliptical rooms. A semi-circular portico is centered on the house's colonnade of paired Ionic columns.

The house became important during World War II. In 1940, the estate owners allowed the Royal Navy to use the house to accommodate overnight pupils of the Royal Navy School of Navigation, HMS Dryad, which was based in Portsmouth Naval Dockyard. In 1941, after heavy bombing of the dockyard, the house was requisitioned and became the new home of HMS Dryad.

In 1943, with the planning for D-Day already underway, the house was chosen to be the location of the advance or forward command post (Sharpener Camp) of the Supreme Headquarters Allied Expeditionary Force. Because of this, HMS Dryad was moved out of the house onto further land requisitioned from the estate. 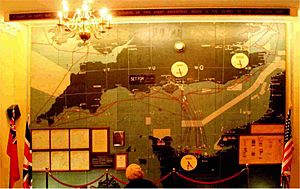 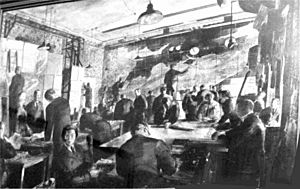 In 1944, in the months leading up to D-Day, the house became the headquarters of the main allied commanders, including Allied Supreme Commander General Eisenhower, Naval Commander-in-Chief Admiral Ramsay and Army Commander-in-Chief General Montgomery.

The large wall maps that were used on D-Day are still in place in the house in the main map room. 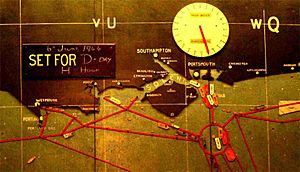 Area of the map showing D-day departure routes from the south coast of England; Isle of Wight in centre 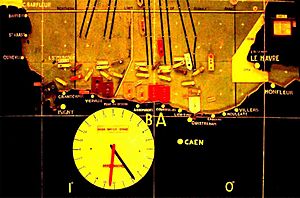 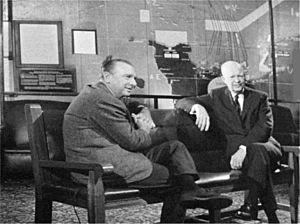 Former US president Eisenhower (right) re-visited the map room in 1963, and was interviewed by Walter Cronkite

In 2004 the functions of HMS Dryad were transferred to HMS Collingwood in Fareham and the site reverted to its original name of Southwick Park.

In November 2016 the Ministry of Defence announced that the site would close in 2025. This was later extended to 2031.

In 1987, the house was recorded as Grade II listed on the National Heritage List for England. The following year, the detached clock tower – a three-stage Italianate structure with a slate roof – was also Grade II listed.

All content from Kiddle encyclopedia articles (including the article images and facts) can be freely used under Attribution-ShareAlike license, unless stated otherwise. Cite this article:
Southwick House Facts for Kids. Kiddle Encyclopedia.