Kids Encyclopedia Facts
This page is about the town. For the local government district, see Borough of Fareham.

Fareham ( FAIR-əm) is a market town at the north-west tip of Portsmouth Harbour, between the cities of Portsmouth and Southampton in south east Hampshire, England. It gives its name to the Borough of Fareham. It was historically an important manufacturer of bricks, used to build the Royal Albert Hall, and grower of strawberries and other seasonal fruits. Current employers include Fareham Shopping Centre, small-scale manufacturers, HMS Collingwood and the Defence Science and Technology Laboratory. 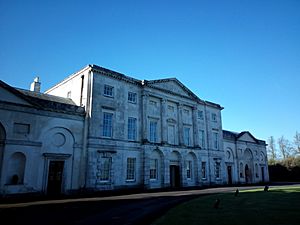 Archaeological excavations around the old High Street area and the church of St Peter & Paul on high ground over the Wallington Estuary have yielded evidence of settlement on the site contemporary with the Roman occupation. No extensive programme of investigation has been possible due to the historic nature of the buildings in this area.

The town has a documented history dating back to the Norman era, when a part of William's army marched up from Fareham Creek before continuing to the Saxon capital of England, Winchester. Originally known as Ferneham (hence the name of the entertainment venue Ferneham Hall), it was listed in the Domesday Book as having 90 households. The ford of Fareham Creek (at the top of Portsmouth Harbour) was the location of the Bishop of Winchester's mills; the foundations were subsumed in the A27 near the railway viaduct. Commercial activity continued at the port until the 1970s, and continues on a smaller scale. By the beginning of the 20th century, Fareham had developed into a major market town.

In the 1960s, Fareham experienced a huge amount of development, as it was one of the areas highlighted for major expansion in the South Hampshire Plan. The idea was to create many thousands of homes as a base for the many people who were looking to move away from the traditional urban centres of Portsmouth and Southampton. During this era that the large housing areas of Hill Park, Miller Drive, and much of Portchester grew until there was a continuous urban conurbation from Portsmouth to Southampton. By this time Fareham had expanded to almost encompass the surrounding villages of Funtley, Titchfield, Catisfield and Portchester.

In the late 1990s, a settlement called Whiteley, straddling the boundaries of Fareham Borough and the City of Winchester, was developed to the north of Junction 9 of the M27 motorway. It is predominantly residential, but it includes the extensive Solent Business Park.

In 1995 Cams Hall and Cams Estate were improved and turned into a modern technology park. 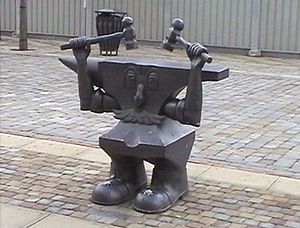 An urban renewal initiative began in 1999, renovating the town centre and historic buildings to include a new entertainment and shopping complex. It featured a major iron sculpture park installed in 2001 to celebrate the work of influential Lancastrian iron pioneer, Henry Cort, who lived in neighbouring Gosport but who had an iron rolling mill in Funtley (or Fontley), on the outskirts of Fareham. There is a sculpture park and a school named after him, Henry Cort Community College.

Fareham is home to Fernham Hall, a multi purpose venue with a capacity of over 700. The hall opened in 1982 and has hosted live music, theatre shows, comedy, pantomimes and conventions.

The Ashcroft Arts Centre, on Osborn Road, has a 150-seat theatre, a gallery, a dance/music studio and a fully licensed bar. It offers a varied programme of events including films, theatre, comedy and workshops.

The pedestrianised area of West Street, in the town centre, is home to a permanent exhibition of the work of 12 blacksmith artists celebrating the achievements of Henry Cort, the 18th century ‘man of iron’ who pioneered the iron refining process at Funtley near Fareham. The puddled wrought iron sculptures are themed on Fareham’s market town history and the exhibition is the largest of its type in Britain.

The village of Wickham, 3 miles north of Fareham, is host to the annual Wickham Festival. The first festival was held from 3–6 August 2006 in the Community Centre and environs. Artists performing included Spiers and Boden, Richard Thompson, Shooglenifty, Sparks, Oysterband, Steeleye Span and The Larry Love Showband. After briefly moving to Stokes Bay in 2008 and 2009, the festival returned to Wickham in 2010, and has since featured James Blunt, 10CC, Lightning Seeds, KT Tunstall, Steve Earle and Jools Holland.

Fareham has a Non-League football club, Fareham Town F.C., and a Rugby Union club, Fareham Heathens, which both play at Cams Alders. It also has a hockey club, which play at Henry Cort Community College and are currently in the Men's Conference West Division, and a cricket club, Fareham and Crofton, which plays at Bath Lane.

There is a competitive swimming club, Fareham Nomads Swimming Club (FNSC), that is affiliated to the Amateur Swimming Association (ASA), ASA South East Region and Hampshire County ASA (HCASA). The Club was formed in 1974 before there was a public swimming pool in Fareham. Due to the lack of a home pool the club took its name because in the early days it used various pools throughout the area for training until 1980 when Fareham Leisure Centre was opened. Since then, the Club has grown considerably and today has a membership of around 250 children, young adults and masters swimmers.

Fareham Sailing and Motor Boat Club located at Lower Town Quay is the home of the Fareham Lugger, a one class design raced biweekly all year round. The club hosts the annual Fareham Regatta featuring gig racing, fun events and sail races.

Fareham is well served by road and rail networks. The M27 motorway passes around the northern edge, and is the main traffic artery into and out of the area. It provides easy access to both Portsmouth and Southampton, and from there to London via the M3 and A3(M).

The A27 was the original route along the south coast before the building of the M27, and runs from Brighton to Southampton, passing through the centre of Fareham. The A32 passes through Fareham at the Quay Street roundabout, a notorious bottleneck, on its way from Gosport to Wickham and through the Meon Valley to Alton.

Fareham was named the most car-dependent town in the UK by the Office for National Statistics in July 2014 with 538.7 cars registered to addresses in the town for every 1,000 residents. 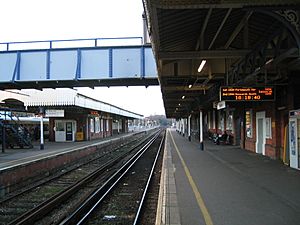 Fareham railway station is on the West Coastway Line, with regular services to Portsmouth, Southampton, Brighton, Cardiff and London. Passenger services also ran south to Gosport until 1953, and north along the Meon Valley to Alton until 1955.

Bus transport in the town is provided by First Hampshire & Dorset, which runs nearly all bus routes. Services run as far as Winchester. The bus station is adjacent to the Market Quay development, and replaced an older station that was demolished in the late 1980s.

Welborne is a proposed new development to the north of the town, intended to include 6,000 houses with businesses and community facilities. A plan for the development was submitted for central Government examination on 23 June 2014, and modifications were published in January 2015 following the inspector's preliminary comments. Fareham Borough Council formally adopted the plan for Welborne as part of its statutory Local Plan for the Borough on 8 June 2015. Construction is scheduled in phases between 2015 and 2036. Transport plans include an upgrade to Junction 10 of the M27 Motorway and a Bus Rapid Transit route.

The Campaign to Protect Rural England Hampshire (supported by a number of community organisations under the name "South Hampshire's Unheard Voices") has opposed the plans due to concerns about building on countryside, possible increased risk of flooding, and the impact on local infrastructure. It has also criticised the planning and consultation process. In 2011, a petition with 1,400 signatures objecting to a new town was submitted to the Council.

In 2017 Fareham College was rated by OFSTED as "Outstanding".

All content from Kiddle encyclopedia articles (including the article images and facts) can be freely used under Attribution-ShareAlike license, unless stated otherwise. Cite this article:
Fareham Facts for Kids. Kiddle Encyclopedia.