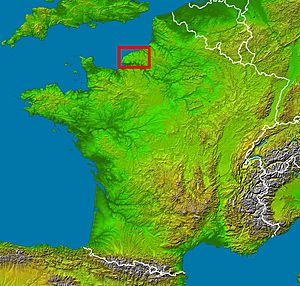 The Pays de Caux (pronounced: [pɛi də ko]) is an area in Normandy, France. It makes up the greater part of the French département of Seine Maritime in Normandy. It is a chalk plateau to the north of the Seine Estuary and extends to the cliffs on the English Channel coast. Its coastline is called the Côte d'Albâtre. In the east, it borders on the Pays de Bray where the layers of soil below the chalk show through.

The area depends on manufacturing more than as agriculture. Even so, the soil quality of the Pays de Caux is the finest in France. It is also known for its fine fabrics. 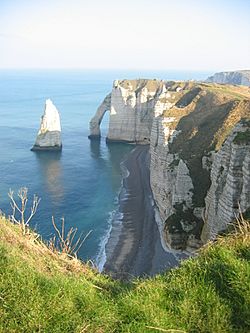 Étretat, falaise d'aval and the needle 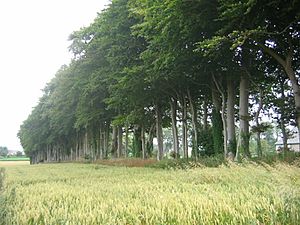 Beeches grown as a wind break around a now derelict farm on the Pays de Caux plateau.

The Pays de Caux is a plateau of Upper Cretaceous chalk, like that which forms the North and South Downs in southern England. Its surface is an undulating plateau but the seaward side has been eroded by the waves so that the coast is formed of high white cliffs in which the small valleys which inland, form the undulations, are truncated leaving what are known locally as valleuses, steep-sided notches in the face of the cliff. They are more or less deeply cut and some form the sites of small towns such as Étretat. The formations left in the eroded cliff there have long attracted artists. See the photograph where Étretat lies to the right, in the valleuse beyond the first ridge.

The main towns in the north are on the coast, Fécamp and Étretat. Dieppe, is towards the margin of the region, lying as it does on the same geological fault as formed the Pays de Bray. This fault gave rise to the deep harbour which the Northmen found when they arrived. (The Swedish for deep is djup.) The towns on the plateau are generally small. Of these, the larger, such as Yvetot, Bolbec and Lillebonne are towards the south, on the Rouen-Le Havre axis. The site of Le Havre was once of the Pays de Caux but the town has developed into an entity with a separate nature.

The population density of the Pays de Caux is a little above the French average having developed fisheries, on the coast, and flax growing and weaving, on the plateau, as traditional industries. The estuarine ports to the south developed trade up-river towards Rouen, once hostilities between the Normans and the French had been settled, with Paris. In more recent times, urbanization has spread from Le Havre and more recently still, from the new industrial polder in the Seine Estuary.

The plateau's exposure to the winds of the sea may account for one of the features of the rural architecture of the region; the plain, unadorned farmhouses in farmsteads, typically enclosed by high earth banks, walls and a sheltering square of trees.

Rescue archaeology undertaken on the line of the A29 autoroute revealed several Gallo-Roman villas. One of the most important is that of Sainte-Marguerite-sur-Mer, on the coast to the west of Dieppe. The archaeologists found a complex of several rooms, organised around a square court. Several of the rooms had been furnished with mosaics. To the north, the baths and other rooms were heated by hypocausts. The materials used were pisé (clay and grit well mixed and rammed down to form a wall), cob (a similar mixture of earth of a buttery consistency or marl, chopped straw and perhaps gravel) and timber framing, typical materials of Normandy’s later building tradition.

Lillebonne is on the site of the main town of the Caletes, the Gaulish tribe of the region. The Gallo-Roman town was established with the name Juliobona, under Caesar Augustus and is famous for its Roman theatre. According to a common use in Roman Gaul, the bona (Gaulish word for “foundation, town”) was dedicated to the Roman emperor, like Augustodunum (Autun), Augustonemetum (Clermont-Ferrand) or Augustodurum (Bayeux), etc. The phonetic evolution from the element Julio- to Lille- can be explained by the analogy with the French word for island: île, with the article agglutination l' = the, that makes sense with the word bona > bonne, which means "good" in French, so "l'île bonne" = the good island. Their original main oppidum could have been Caudebec-en-Caux or Fécamp, according to the archeological excavations and the numerous Gaulish artefacts, that were discovered in both towns. 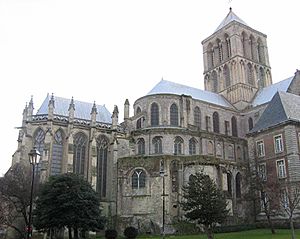 The abbey of Fécamp

In the Merovingian period, the Pays de Caux became distinct from Talou: the ancient city of the Caletes separated into entities or ‘countries’ in the sense of the Latin pagus.

From the creation of the county of Rouen and of the Duchy of Normandy in 911, the Vikings settled a great number of people in the region and left an enduring legacy in the Cauchois dialect but also in the ethnic makeup of the Cauchois Normans. 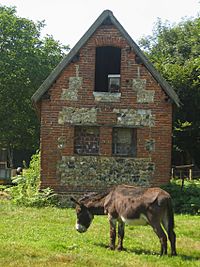 Manoirs and châteaux of the 15th and 16th centuries

A manoir (manor house) is in principle, the residence of a seigniorial lord though, in practice, the term now includes country houses of the gentry. As a rule, they are not fortified. Since the Hundred Years' War, country houses have not had ramparts and towers. Artillery has rendered them obsolete. The peace and prosperity which were recovered following 1450, offered the option of reconstructing country houses and local materials such as flint and limestone were used. The owners could allow themselves to follow Renaissance style.

Most Norman manoirs have a dovecote in the courtyard. A study by historians revealed 635 dove cotes in the three arrondissements of Dieppe, Le Havre and Rouen. Most are round and are permanent structures. The rarities are polygonal and timber-framed. A few to be noted are: 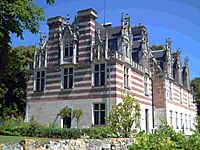 The rugged scenery of the Pays de Caux is only a short distance from Paris. Artists including Claude Monet and Gustave Courbet came there to paint.

All content from Kiddle encyclopedia articles (including the article images and facts) can be freely used under Attribution-ShareAlike license, unless stated otherwise. Cite this article:
Pays de Caux Facts for Kids. Kiddle Encyclopedia.