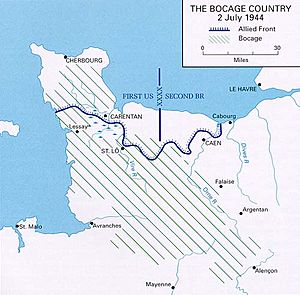 Bocage [boh-kahzh] is a Norman word which has found its way into both the French and English languages. It may refer to a small forest or a that includes leaves. But most often it refers to pastures bordered by thick forest or hedges. The trees and hedges around the pastures or fields are planted in earth . Between the planted mounds are sunken lanes. The word bocage forms part of the name for several towns in parts of Lower Normandy. The term Bocage Normandy refers to the area around Saint-Lô and Vire.

During World War II following the Allied Invasion of Normandy, the allies found themselves in 'hedgerow country' (bocage). It was ideal for German troops to hide in and not be seen until it was too late. The hedgerows were thick enough to hide tanks and artillery pieces. The final Allied of the bocage into open country took over eight weeks of fighting.

All content from Kiddle encyclopedia articles (including the article images and facts) can be freely used under Attribution-ShareAlike license, unless stated otherwise. Cite this article:
Bocage Facts for Kids. Kiddle Encyclopedia.