Saint-Lô is a commune in north-western France, the capital of the Manche department in the region of Normandy.

Although it is the second largest city of Manche after Cherbourg, it remains the prefecture of the department. It is also chef-lieu of an arrondissement and two cantons (Saint-Lô-1 and Saint-Lô-2).

The commune has 18,931 inhabitants who are called Saint-Lois(es). The names of Laudois(es), Laudien(ne)s or Laudinien(ne)s are also cited. A martyr city of World War II, Saint-Lô was decorated with the Legion of Honour in 1948 and was given the nickname "Capital of the Ruins", a phrase popularised by Samuel Beckett. 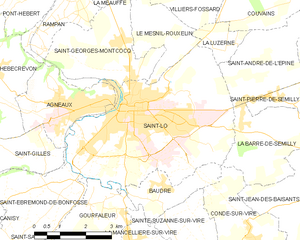 Map of the commune 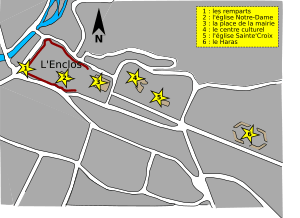 Plan of the city centre

The city was born under the name of Briovera on a rocky outcrop of schist belonging to the Armorican Massif, in the Cotentin Peninsula, between the confluences of the Vire – which dominates the city centre – with the Dollée and Torteron, two rivers channelled in their urban sections. This historic heart of the city became L'Enclos, a site well suited to passive defence.

The east of the territory is the former commune of Sainte-Croix-de-Saint-Lô, south of Saint-Thomas-de-Saint-Lô, absorbed in 1964. 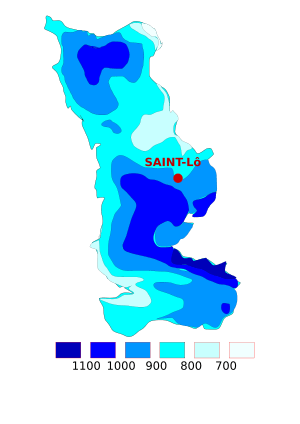 Saint-Lô has a mild oceanic climate characterised by mild winters and temperate summers. It has an average annual rainfall of 800 to 900 mm (31 to 35 in) per year. Rainfall is quite frequent throughout the year but most abundant in autumn and winter, in connection with the disturbances coming from the Atlantic Ocean. Rarely intense, they often fall in the form of drizzle. The average temperature is 10 °C (50 °F). In winter, the average temperature ranges between 1 and 7 °C (34 and 45 °F). There are between 30 and 40 days of frost per year. In summer, the average temperature lies around 20 °C (68 °F). 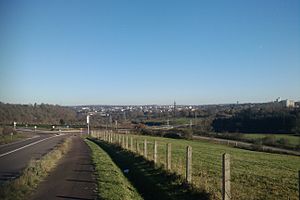 View of Saint-Lô, from the slopes of the River Vire.

The city, at a crossroads between Caen, Cherbourg and Rennes, has a natural vocation of marketplace in the centre of the Manche bocage. A city of craftsmen and trade, which owes part of its prosperity to its status of prefecture, it has experienced a late industrialisation and attempts to assert its place, today, in the regional agri-food industry.

In 2008, Saint-Lô was equipped with fibre optic cable to allow companies and individuals to have very high speed internet (approximately 1 Gbps and 100 Mbit/s for individuals).

All content from Kiddle encyclopedia articles (including the article images and facts) can be freely used under Attribution-ShareAlike license, unless stated otherwise. Cite this article:
Saint-Lô Facts for Kids. Kiddle Encyclopedia.