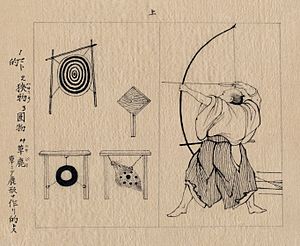 A Japanese archer with targets. Ink on paper, 1878

Kyūdō (way of the bow) is a Japanese form of archery. It is a martial art. Kyūdō is based on ancient archery (kyū-jutsu). Archery in Japanese began in the Jōmon period; and it developed in the samurai or military class.

At the beginning of the Meiji era (1868-1912), the samurai lost their position because the Emperor Meiji replaced the Tokugawa family, the samurai, as a ruler of the nation. Therefore, all martial arts, including kyudo, declined.

Japan Kyudo Federation plays a role in the promotion of kyudo as a sport. The equipment of kyūdō has evolved from ancient times. 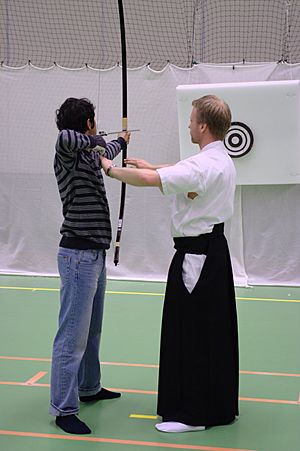 There are many styles, but most of kyudo players learn the technique ruled by the All Japan Kyudo Federation. In most cases, style means the kind of movement. 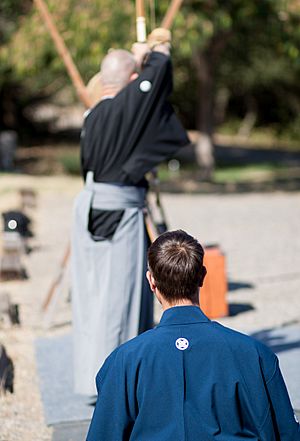 There are the Eight Stages of Shooting (Shaho-Hassetsu); which is a fundamental movement; 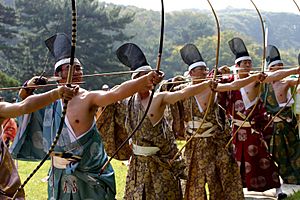 Yumi is traditionally made of bamboo, wood and leather. But, recently, many yumi are made from fiberglass and carbon fiber. They are cheaper than those made of bamboo.

The arrow's shaft is traditionally made of bamboo. Recently, many shafts are made of aluminum or carbon fibers. The traditional fletching is made with three fins or vanes of eagle or hawk feathers. The modern arrow may be made with turkey or swan feathers.

Yugake is the glove worn on the right hand. It is typically made of deerskin.

All content from Kiddle encyclopedia articles (including the article images and facts) can be freely used under Attribution-ShareAlike license, unless stated otherwise. Cite this article:
Kyūdō Facts for Kids. Kiddle Encyclopedia.