Li Ning (born March 10, 1963 in Laibin, Guangxi) is a retired Chinese gymnast and entrepreneur. He founded the sportswear company Li-Ning.

Li started training at the age of eight and was selected into the national team in 1980. In 1982, he won six of the seven medals awarded at the Sixth World Cup Gymnastic Competition, earning him the title "Prince of Gymnastics" (体操王子/體操王子).

Li is most famous for winning 6 medals at the 1984 Summer Olympics, which was the first Olympics in which the People's Republic of China participated. He won three gold medals (in floor exercise, pommel horse, and rings), two silver medals, and one bronze medal. Li became the most decorated Chinese athlete at the first Olympics that China participated in after the founding of the People's Republic in October 1949.

Li took part in his second 1988 Olympics in Seoul despite carrying injuries. It was an end to an illustrious gymnastic career, as he was off-form and made crucial mistakes which robbed him of the chance of a medal. 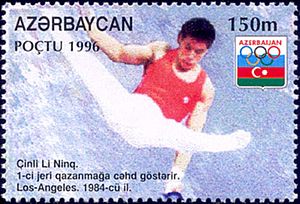 Li Ning on a 1996 Azerbaijani stamp

Li retired from sporting competition in 1988, and in 1990 he founded Li-Ning Company Limited, which sells footwear and sporting apparel in China. Li remains chairman of the company's board of directors. According to Hurun Report's China Rich List 2014, he has an estimated fortune of RMB 5 billion, making him the 407th wealthiest person in China.

Li was inducted into the International Gymnastics Hall of Fame in 2000, becoming the first Chinese inductee.

At the 2008 Summer Olympics Li Ning ignited the cauldron at the opening ceremony after being hoisted high into the air with cables and miming running around the rim of the stadium.

Li is married to Chen Yongyan, a fellow gymnast who won an Olympic bronze in 1984.

All content from Kiddle encyclopedia articles (including the article images and facts) can be freely used under Attribution-ShareAlike license, unless stated otherwise. Cite this article:
Li Ning Facts for Kids. Kiddle Encyclopedia.