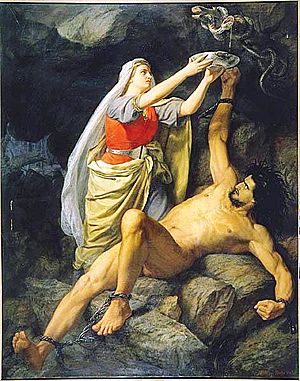 Sigyn is a goddess in Norse mythology. She is the wife of Loki. Sigyn is described in the Poetic Edda and the Prose Edda. She is said to be a very loyal wife. She is the goddess of fidelity and bonds who stays with Loki even during his final punishment. Her name means victorious and she is often depicted holding a bowl over Loki to catch the venom of a serpent to prevent it from burning him.

All content from Kiddle encyclopedia articles (including the article images and facts) can be freely used under Attribution-ShareAlike license, unless stated otherwise. Cite this article:
Sigyn Facts for Kids. Kiddle Encyclopedia.