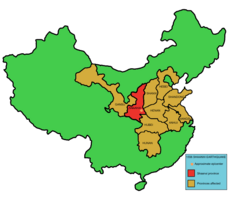 Map of China showing the modern-day Shaanxi province (red) and the other provinces affected by the earthquake (orange).

The 1556 Shaanxi earthquake was a very bad earthquake that occurred on the morning of 23 January 1556 in Shaanxi, during the Ming Dynasty. It killed around 830,000 people, making it the worst earthquake in human history by number of deaths.

More than 97 counties in the provinces of Shaanxi, Shanxi, Henan, Gansu, Hebei, Shandong, Hubei, Hunan, Jiangsu and Anhui were affected. The earthquake destroyed a 840-kilometre-wide (520 mi) area. In some counties, 60% of the population was killed. It had a magnitude of around 8.0.

At the time, many people in that area lived in homes they made from artificial caves. Loess, the material that made these caves, is known to be very weak and can cause landslides. Scholars believe that is why so many people had died.

All content from Kiddle encyclopedia articles (including the article images and facts) can be freely used under Attribution-ShareAlike license, unless stated otherwise. Cite this article:
1556 Shaanxi earthquake Facts for Kids. Kiddle Encyclopedia.