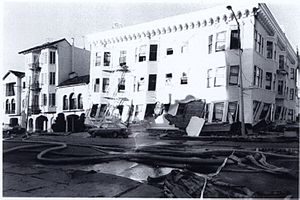 Very often, non-geologists use this scale, because it is easier for people to describe what damage an earthquake caused, than to do calculations to get a value on the Richter scale.

Values range from I - Instrumental to XII - Catastrophic.

Giuseppe Mercalli (1850-1914) originally developed the scale with ten levels. In 1902, Adolfo Cancani extended the scale to include twelve levels. August Heinrich Sieberg completely rewrote the scale. For this reason, the scale is sometimes named Mercalli-Cancani-Sieberg scale, or MCS scale.

Harry O. Wood and Frank Neumann translated it into English, and published it as Mercalli–Wood–Neumann (MWN) scale. Charles Francis Richter also edited it. He also developed the Richter scale later on.

The lower degrees of the Modified Mercalli Intensity scale generally deal with the manner in which the earthquake is felt by people. The higher numbers of the scale are based on observed damage to structures

The large table gives Modified Mercalli scale intensities that are typically observed at locations near the epicenter of the earthquake.

The small table is a rough guide to the degrees of the Modified Mercalli Intensity scale. The colors and descriptive names shown here differ from those used on certain shake maps in other articles. However, it will not be 100% accurate.

All content from Kiddle encyclopedia articles (including the article images and facts) can be freely used under Attribution-ShareAlike license, unless stated otherwise. Cite this article:
Mercalli intensity scale Facts for Kids. Kiddle Encyclopedia.