Linares is a Chilean city and commune in the Maule Region, in the Chilean Central Valley. Linares is the capital city of the province of Linares.

Linares was founded on 23 May 23 1794, as the "Villa de San Ambrosio de Linares" by Ambrosio O'Higgins, father of Bernardo O'Higgins. O'Higgins was then "Captain General" (a military governor) of Chile and Francisco de la Mata Linares was the Governor of Concepción.

In 1873, the province of Linares was created from the old province of Maule; it had three departments: Linares, Parral and Loncomilla.

In 1927, Linares was eliminated as a province and became part of the new province of Maule but, in 1936, Linares was made again a province with the same departments. When the regions were created in 1975, the Maule region was formed with the Curicó, Linares, Maule and Talca provinces.

The people from Linares are called Linarenses, both men and women. 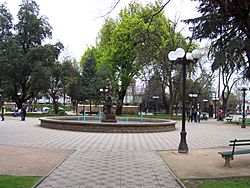 The rivers Ancoa, Putagán and Achibueno are the main rivers that flow through the commune or form its natural borders.

Most of the territory of the commune is within the central plain (Valle Central de Chile). Some low hills are in the most western part of the commune, while its most eastern part is marked by the presence of the foothills of the Andes mountains.

The commune of Linares is bordered on the west by San Javier; on the north by Villa Alegre, Yerbas Buenas and Colbún; on the east, by Colbún, and on the south, by Longaví.

The climate of Linares is a mild Mediterranean climate, Csb in the Köppen climate classification. 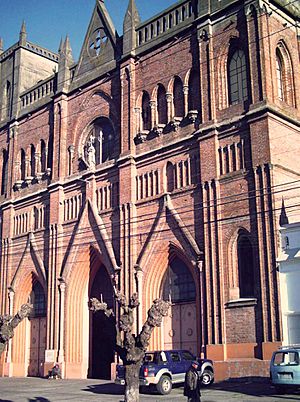 The city and its surroundings have many attractions, for example:

Some natural attractions in the surrounding area include the piedmont of the Andes mountains, with forests of pines and other trees; lakes (the artificial Colbún lake); rivers, and good camping and hiking areas.

Linares is an important agricultural, industrial and financial center of the region.

All content from Kiddle encyclopedia articles (including the article images and facts) can be freely used under Attribution-ShareAlike license, unless stated otherwise. Cite this article:
Linares, Chile Facts for Kids. Kiddle Encyclopedia.