Curicó is a Chilean city and commune in the Maule Region, in the Chilean Central Valley. Curicó is the capital city of the province of Curicó.

Curicó was founded on 9 October 1743 by José Manso de Velasco when Chile was a Spanish colony with the name San José de Buena Vista. In 1747, the Governor Juan Manuel de Rosas moved the city about 5 km (3 mi) to the north, where it is now on the foot of the Buena Vista hill (now called "Cerro Condell"), because the original place was too humid.

Curicó got the title of "city" in 1830. The city was destroyed by an earthquake in 1928 and rebuilt during the following year. It was badly damaged in the earthquake of February 2010.

The people from Curicó are called Curican (in Spanish: Curicanos for men and Curicanas for women). 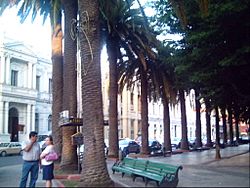 The rivers Guaiquillo and Mataquito are the main rivers that flow through the commune. Most of the territory of the commune is within the central plain (Valle Central de Chile). The valley is between low mountains to the west and east.

The commune of Curicó is bordered on the west by Rauco; on the north by Teno; on the east, by Romeral, and on the south, by Molina and Sagrada Familia.

The Köppen climate classification type for the climate at Curicó is a "dry-summer subtropical climate" (also known as Mediterranean Climate) and of the subtype "Csb".

The city's economy is based mainly on agriculture, because the Mediterranean climate creates comparative advantages with markets such as apples, wines, and cherries.

All content from Kiddle encyclopedia articles (including the article images and facts) can be freely used under Attribution-ShareAlike license, unless stated otherwise. Cite this article:
Curicó Facts for Kids. Kiddle Encyclopedia.