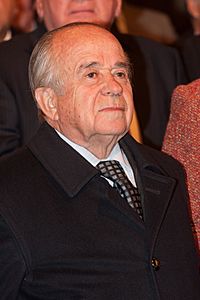 José Andrés Rafael Zaldívar Larraín, (born March 18, 1936) popularly known as El Chico Zaldívar ("Short Zaldívar"), is a Chilean Christian Democrat politician. He was born in Santiago de Chile. He unsuccessfully ran for President of Chile in the 1999–2000 election. Between 2017 and 2018, he was President of the Senate.

All content from Kiddle encyclopedia articles (including the article images and facts) can be freely used under Attribution-ShareAlike license, unless stated otherwise. Cite this article:
Andrés Zaldívar Facts for Kids. Kiddle Encyclopedia.