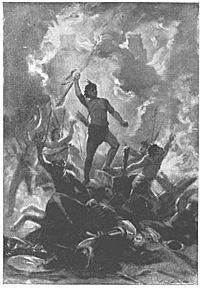 Caupolicán was a leader of the Mapuche people of Chile, who decided to choose a supreme war leader in response to the Spanish threat. Caupolican supposedly won the position by demonstrating his superior strength by holding up a tree trunk three days and three nights, though this may be an exaggeration. In addition to proving his physical power, he also had to improvise a poetical speech to inspire the people to valor and unity. Much of the legend of Caupolican is found in the epic poem La Araucana by Alonso de Ercilla, a major piece of literature about the Spanish conquest of America.

All content from Kiddle encyclopedia articles (including the article images and facts) can be freely used under Attribution-ShareAlike license, unless stated otherwise. Cite this article:
Caupolicán Facts for Kids. Kiddle Encyclopedia.