Rancagua is a city and commune in central Chile and part of the Rancagua conurbation. It is the capital of the Cachapoal Province and of the O'Higgins Region, located 87 km (54 mi) south of the national capital of Santiago.

Its first name was Santa Cruz de Triana. In 2012, its population was 232,211. The main economic activities range from mining, tourism, agriculture, timber, food production and services to minor industrial activities. The city also serves as the administrative and legal center of the region.

Next to Machalí and Gultro forms the Rancagua conurbation; and next to Curicó, Talca and Concepción, is one of the most important and populated cities of the south central zone of Chile. 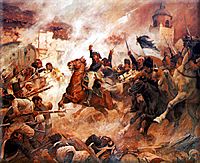 The Battle of Rancagua during the Chilean War of Independence, by Pedro Subercaseaux.

Rancagua was founded by José Antonio Manso de Velasco, who founded several cities in the central area of Chile. The city's original name was Villa Santa Cruz de Triana. However, before the Spaniards arrived the area was inhabited by local Picunche tribes and had also fallen briefly under the control of the Inca Empire, whose traces can still be found near the city today.

The city is famous in Chilean history as the scene of the Disaster of Rancagua of 1814, when Chilean forces fighting for independence from Spain were defeated, marking the beginning of the period known as the Reconquista (Reconquest, an attempt by Spain to regain control of Chile).

In recent years the city has become one of the most attractive cultural and tourist centers in the O'Higgins Region, mainly due to the vineyards in the area. There are also some archeological sites such as Pukara de La Compañia and the nearby Rio Cipreses nature reserve, both of which can be visited by private vehicle or with local tour companies. Rancagua also offers sports centers and easy access to smaller villages and towns.

The city is connected to Santiago by the Panamerican Highway (Chile Route 5), and the Metrotren connects the metro service in Santiago to Rancagua by train.

Rancagua is home of the University of Rancagua, the first private university to be established in the O'Higgins Region.

Rancagua is also known for El Teniente, the "largest underground copper mine in the world", located about 40 km (25 mi) to the east of the city in the Andes mountain range. El Teniente is a division of the state-owned mining enterprise, Codelco.

The city's Braden Copper Stadium was one of the four venues of the 1962 FIFA World Cup. More recently, it houses the O'Higgins professional soccer club, one of the leading teams in Chilean professional soccer. Every year, the National Championship of Chilean rodeo is held in the Medialuna Monumental de Rancagua. On 2015, the city will be host the 2015 Copa América, receiving two matches of the tournament

All content from Kiddle encyclopedia articles (including the article images and facts) can be freely used under Attribution-ShareAlike license, unless stated otherwise. Cite this article:
Rancagua Facts for Kids. Kiddle Encyclopedia.