Flag of Chile facts for kids 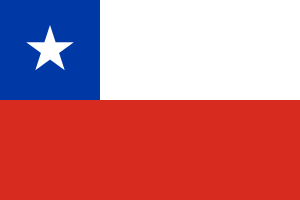 The national flag of Chile was adopted in 1817.

The flag shows two equal horizontal bands of white (top) and red; there is a blue square the same height as the white band at the hoist-side end of the white band; the square bears a white five-pointed star in the center.

Protocol dictates that it can hang horizontally or vertically, but the star must always be located in the top-left corner.

The colors have meanings:

Note: the Chilean flag is similar to the flag of the state of Texas.

All content from Kiddle encyclopedia articles (including the article images and facts) can be freely used under Attribution-ShareAlike license, unless stated otherwise. Cite this article:
Flag of Chile Facts for Kids. Kiddle Encyclopedia.