Isla Salas y Gómez, also known as Isla Sala y Gómez, is a small uninhabited Chilean island in the Pacific Ocean. It is sometimes considered the easternmost point in the Polynesian Triangle.

Isla Salas y Gómez is located 3,210 km west of the Chilean mainland, 2,490 km west of Chile's Desventuradas Islands, and 391 km east-northeast of Easter Island, the closest landmass. Salas y Gómez consists of two rocks, a smaller one in the west measuring 4 hectares in area (270 meters north-south, 200 meters east-west), and a larger one in the east measuring 11 ha (500 meters north-south, 270 meters east-west), which are connected by a narrow isthmus in the north, averaging approximately 30 meters in width. The total area is approximately 15 hectares (0.15 km²), and the total length northwest-southeast is 770 meters. Its highest point, 30 meters above sea level, is in the south of the eastern rock, less than 30 meters from the shore, above a 10 meter high cliff. The highest elevation on the western rock is 26 meters.

The island is showered with saltwater, and the shoreline is dotted with countless tidepools. Because the shoreline consists primarily of cliffs, landing on the island is difficult in all but the calmest of conditions.

There are no permanent sources of freshwater on the island, but there is an intermittent rainwater pool in a depression on the eastern rock, which often forms a cache of freshwater 75 meters in diameter. This is essential for the survival of the large population of seabirds.

Even when this area appears dry at the surface, the sand is still moist just a few inches below the surface. This flat sandy area is also the only place on the island suitable for landing helicopters.

In 1994, the Chilean Navy installed an automated beacon and a tsunami warning system. The island has since been declared a nature sanctuary.

The Rapa Nui name for the island is Motu Motiro Hiva or Manu Motu Motiro Hiva, meaning (Bird's) Islet on the way to Hiva. Hiva is part of the names of several Polynesian islands, particularly in the Marquesas Islands. In the Rapa Nui language, however, it means "far off lands" and is the name for the mythical original homeland of the Polynesians. From Easter Island, Salas y Gómez is almost the opposite direction to the Marquesas, and the next inhabited territory "behind" Salas y Gómez would be the coast of South America. This was one of the factors that led Thor Heyerdahl to theorize that there was pre-European contact between Polynesia and South America.

The current name, Salas y Gómez, is derived from the name of Spaniards José Salas Valdés and José Manuel Gómez, who made the first detailed description of the island, following a visit beginning 18 October 1805. The island is sometimes also referred to as Isla Sala y Gómez, with "Sala" being a misspelling of Salas.

Although there is no evidence that the island has ever been permanently inhabited, Easter Islanders were certainly aware of its existence, as indicated by the pre-European name of the island. Tradition says that the island was occasionally visited to collect fledglings and eggs. The island was said to have been difficult to land upon, because the gods Make-make and Huau protected the seabirds from those who ate their eggs and offspring. Because of these historical connections to Easter Island, Salas y Gómez might be considered part of Polynesia; if so its location would make it the easternmost landmass of Polynesia. (That title is usually awarded to Easter Island, 391 km further west.)

Salas y Gómez was claimed by Chile in 1888, and was administered by the Chilean Navy. Beginning 1 March 1966, the island was included in the department of Isla de Pascua. On 25 July 1974, the department was reorganized as the Easter Island Province.

During the 2008 Deepsea Coral Symposium, Wellington, the idea of a Marine Protected Area on the submarine ridges of Salas y Gomez and Nazca is launched for the very first time. Then, in February 2009, the World Wildlife Fund, WWF Chile, published a scientific revision in the Latin American Journal of Aquatic Research, giving the scientific background that supported the government report for the declaration of the non-take MPA Motu Motiro Hiva.

This declaration follows the efforts of Oceana and National Geographic to both study and highlight the ecological value of this area, and to encourage its protection. These organizations are planning additional expeditions to the area in order to draft a conservation plan, and to propose the widening of the protected area to encompass the whole Exclusive Economic Zone around the island.

Salas y Gómez is a volcanic high island, consisting of the summit of a large mountain which rises about 3500 metres from the sea bed. Scott Reef (not to be confused with Scott Reefs off Western Australia), 1.5 km further northeast, is another peak of the same mostly submarine mountain, and has a least depth of 25 meters above it. Salas y Gómez is part of the same Salas y Gómez Ridge as Easter Island to the west, these two locations being the only places where the otherwise submarine mountain range extends above sea level. There are several dozen more seamounts in the range, which extends 2232 km eastward until Nazca Seamount at 23°36′S 83°30′W﻿ / ﻿23.600°S 83.500°W﻿ / -23.600; -83.500, where it joins the Nazca Ridge. 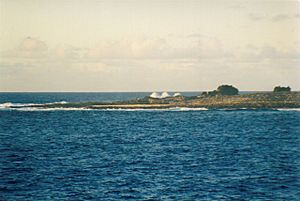 Salas y Gómez and Easter Island form a distinct ecoregion, the Rapa Nui subtropical broadleaf forests. However Salas y Gómez is largely barren with no forests and only four species of terrestrial plants; these include Asplenium obtusatum ("spleenwort"), a type of fern which only grows in protected areas at higher elevations.

Besides a number of insect species, the only non-aquatic fauna are about a dozen species of seabird, which use the island as a rookery, with the estimated number of adult birds in 1985:

Those numbers may vary considerably from year to year, due to weather conditions, and it has been observed that the overall numbers were much lower in 1986.

Marine fauna includes a large number of littoral crustaceans, echinoidea, etc., as well as a large assortment of reef fishes and a number of species of shark, which swimmers report to be "curious", but not aggressive. Lacks of studies resulting in poor understandings of oceanic fauna of Easter Island and waters in vicinity, however possibilities of undiscovered breeding grounds for humpback, southern blue and pygmy blue whales including Isla Salas y Gómez and the Easter Island have been considered.

All content from Kiddle encyclopedia articles (including the article images and facts) can be freely used under Attribution-ShareAlike license, unless stated otherwise. Cite this article:
Isla Salas y Gómez Facts for Kids. Kiddle Encyclopedia.