Flag of Uruguay facts for kids 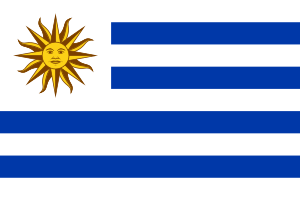 The national flag of Uruguay was created in July 1830.

It has a yellow sun on the top-left corner. The flag has nine stripes. Four of them are dark blue and five are white. The original flag had 16 stripes, but it was changed in December 1828. It has a ratio of 2:3.

All content from Kiddle encyclopedia articles (including the article images and facts) can be freely used under Attribution-ShareAlike license, unless stated otherwise. Cite this article:
Flag of Uruguay Facts for Kids. Kiddle Encyclopedia.