The department and its capital city are named after Tacuarembó river, the main tributary of the Río Negro river.

The first division in departments of Uruguay was in 1816. At that time, the Paysandú Department included all the territory north of the Río Negro, including the actual departments of Artigas, Rivera, Tacuarembó, Salto, Paysandú and Río Negro. On 16 June 1837 a new division of Uruguay was made and this territory was divided in three parts; one of these parts was the Tacuarembó Department that included also the actual department of Rivera, until it was split from it in 1884. 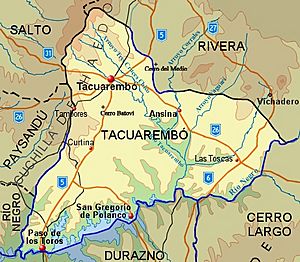 It borders Rivera Department to its north and northeast, the departments of Salto, Paysandú and Río Negro to its west and Durazno and Cerro Largo to the south separated by the Río Negro.

The Río Negro river forms the southern border of the department but the most important river that is completely within the department is the Tacuarembó river, the main tributary of Río Negro.

The Köppen climate classification type for the climate at Paso de los Toros, in the southwest of the department, is a "Humid subtropical climate" and of the subtype Cfa.

The inhabitants of the Tacuarembó department (and of the city of Rivera) are known, in Spanish, as Tacuaremboenses.

Evolution of the population in Tacuarembó 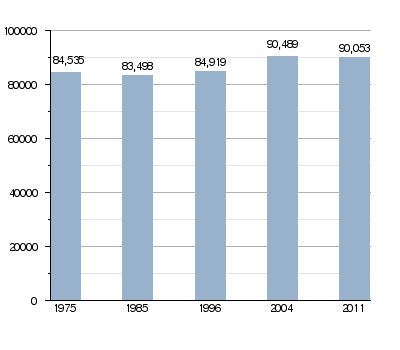 According to the 2011 census, the Tacuarembó department has a rural population of 9,660.

All content from Kiddle encyclopedia articles (including the article images and facts) can be freely used under Attribution-ShareAlike license, unless stated otherwise. Cite this article:
Tacuarembó Department Facts for Kids. Kiddle Encyclopedia.