The Salto department (Spanish: Departamento de Salto) is a department of Uruguay. The capital is the city of Salto.

The name of the department and of its capital city comes from the presence of small waterfalls (Spanish: Saltos) in the Uruguay river.

The Salto department was made on 17 June 1837; then, the department included the present Artigas Department. Its final borders were defined on 1 October 1884, when the Artigas department was separated from Salto. 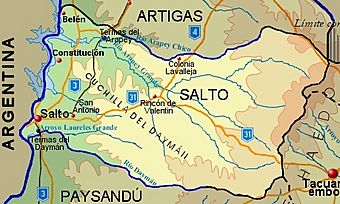 The Salto department is in the northwestern part of the country. It has an area of 14,163 km2 (5,468 sq mi), the second largest in the country after the Tacuarembó department. It is the fourth department with more people living in it, with a population of 124,878 inhabitants (2011 census) for a population density of 10.5.

The Köppen climate classification type for the climate in the city of Salto is a "Humid subtropical climate" and of the subtype Cfa.

The inhabitants of the Salto department (and of the city of Artigas) are known, in Spanish, as Salteños (women: Salteñas.

Evolution of the population in Salto 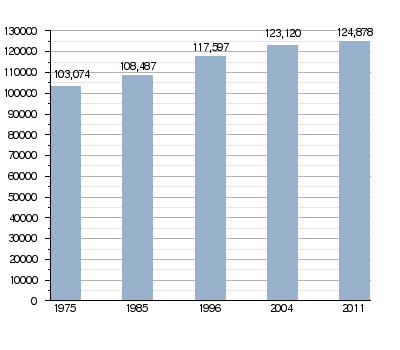 According to the 2011 census, the Artigas department has a rural population of 7,849.

All content from Kiddle encyclopedia articles (including the article images and facts) can be freely used under Attribution-ShareAlike license, unless stated otherwise. Cite this article:
Salto Department Facts for Kids. Kiddle Encyclopedia.