The Rivera department (Spanish: Departamento de Rivera) is a department of Uruguay. The capital is the city of Rivera.

The department and its capital city are named after Fructuoso Rivera (1784–1854), first president of Uruguay. 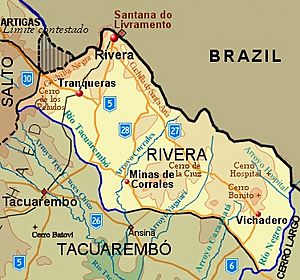 In the middle of the department is the hill Cerro de la Cruz, while on its eastern end are the hills Cerro del Hospital and Cerro Bonito.

The western part of its southern border with the Tacuarembó Department is formed by the Tacuarembó river (a tributary of the Río Negro river, with its tributaries flowing through most of the department.

The Köppen climate classification type for the climate at Rivera is a "Humid subtropical climate" and of the subtype Cfa.

The inhabitants of the Rivera department (and of the city of Rivera) are known, in Spanish, as Riverenses.

Evolution of the population in Rivera 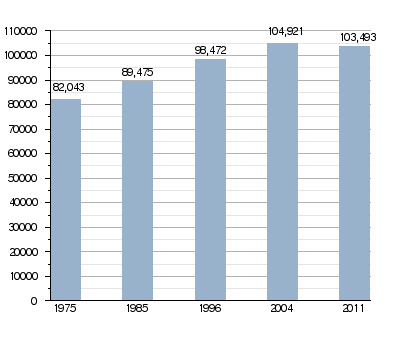 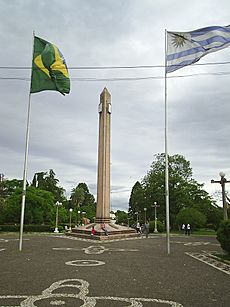 According to the 2011 census, the Rivera department has a rural population of 7,602.

All content from Kiddle encyclopedia articles (including the article images and facts) can be freely used under Attribution-ShareAlike license, unless stated otherwise. Cite this article:
Rivera Department Facts for Kids. Kiddle Encyclopedia.