The Artigas department (Spanish: Departamento de Artigas) is a department of Uruguay. The capital is the city of Artigas.

The department and its capital city are named after José Gervasio Artigas (1764–1850), leader of the Orientales (inhabitants of the Banda Oriental, the Eastern side of the Uruguay river) during the wars of independence of Uruguay. 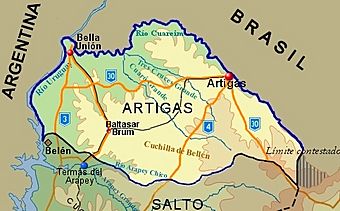 The Artigas department is the most northern department of Uruguay; it is in the northwestern part of the country. It has an area of 11,928 km2 (4,605 sq mi), the fifth largest in the country. The population is 73,378 inhabitants (2011 census) for a population density of 6.2.

Artigas is the only Uruguayan department that borders two other countries: Brazil and Argentina.

The department is surrounded by three rivers:

The Köppen climate classification type for the climate at Artigas is a "Humid subtropical climate" and of the subtype Cfa.

The inhabitants of the Artigas department (and of the city of Artigas) are known, in Spanish, as Artiguenses.

Evolution of the population in Artigas 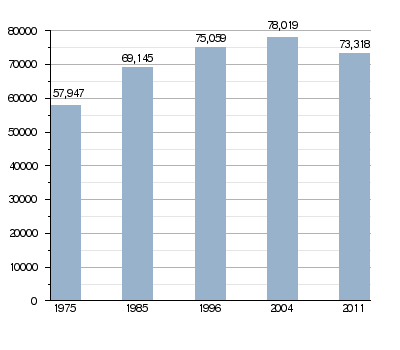 According to the 2011 census, the Artigas department has a rural population of 3,524.

All content from Kiddle encyclopedia articles (including the article images and facts) can be freely used under Attribution-ShareAlike license, unless stated otherwise. Cite this article:
Artigas Department Facts for Kids. Kiddle Encyclopedia.