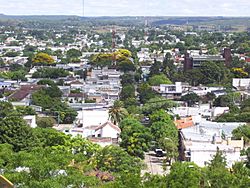 A view of Rivera from Cerro Marconi

Rivera is the capital of the Rivera Department in Uruguay. It has about 64,400 inhabitants and is the sixth largest city by population in Uruguay.

All content from Kiddle encyclopedia articles (including the article images and facts) can be freely used under Attribution-ShareAlike license, unless stated otherwise. Cite this article:
Rivera, Uruguay Facts for Kids. Kiddle Encyclopedia.