Mario Orlando Hardy Hamlet Brenno Benedetti Farrugia ( 14 September 1920 – 17 May 2009), best known as Mario Benedetti, was a Uruguayan journalist, novelist, and poet and an integral member of the Generación del 45. Despite publishing more than 80 books and being published in twenty languages he was not well known in the English-speaking world. In the Spanish-speaking world he is considered one of Latin America's most important writers of the latter half of the 20th century.

Benedetti was born in Paso de los Toros in the department of Tacuarembó to Brenno Benedetti (a pharmaceutical and chemical winemaker) and Matilde Farrugia (a family of Italian descent). Two years later, they moved to Tacuarembó, the capital city of the province, and shortly after that, his father tried to buy a chemist’s but was swindled and went into bankruptcy, so, they moved and settled in Montevideo, the capital city of the country, where they lived in difficult economic conditions. Mario completed six years of primary school at the Deutsche Schule in Montevideo, where he also learned German, which later allowed him to be the first translator of Kafka in Uruguay. His father immediately removed him from the school when Nazi ideology started featuring in the classroom. For two years afterwards he studied at Liceo Miranda, but for the rest of his high school years he did not attend an educational institution. In those years he learned shorthand, which was his livelihood for a long time. At age 14 he began working, first as a stenographer and then as a seller, public officer, accountant, journalist, broadcaster and translator. He trained as a journalist with Carlos Quijano, in the weekly Marcha. Between 1938 and 1941 he lived in Buenos Aires, Argentina. He worked in different professions on both banks of the Río de la Plata river, for example, as a stenographer. In 1946 he married Luz López Alegre.

He also wrote for the famous weekly Uruguayan newspaper Marcha from 1945 until it was forcibly closed by the military government in 1973, and was its literary director from 1954. In 1957 he travels to Europe and visits nine countries as a correspondent for Marcha weekly magazine and El Diario newspaper.

For 12 years, from 1973 to 1985, when a civic-military dictatorship ruled Uruguay, Benedetti lived in exile. He first went to Buenos Aires, and then to Lima in Peru where he was detained, deported and then given amnesty. He went to Cuba in 1976 and the following year to Madrid, Spain. His exile was made particularly trying by the fact that his wife had to remain in Uruguay to look after both of their mothers. In 1980 he moved to Palma, Majorca. 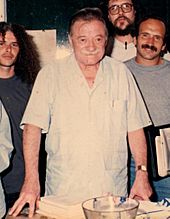 Benedetti returned to Uruguay in March 1985 following the restoration of democracy, and thereafter divided his time between Montevideo and Madrid. He has been granted Honoris Causa doctorates by the Universidad de la República, Uruguay, the Universidad de Alicante, Spain and the Universidad de Valladolid, Spain. In 1986 he was awarded Laureate Of The International Botev Prize. On 7 June 2005, he was named the recipient of the Menéndez Pelayo International Prize. His poetry was also used in the 1992 Argentine movie The Dark Side of the Heart (El lado oscuro del corazón) in which he read some of his poems in German.

In 2006, Mario Benedetti signed a petition in support of the independence of Puerto Rico from the United States.

In the last ten years of his life he suffered from asthma and spent his winters in Madrid (where it was summer) in order to avoid the cold, though as his health deteriorated he eventually remained in Montevideo. In 2006 his wife Luz López died, ending more than six decades of matrimony.

He died in Montevideo on 17 May 2009. He had suffered from respiratory and intestinal problems for more than a year. His remains are buried at the National Pantheon in the Central Cemetery of Montevideo.

Before dying he dictated to his personal secretary, Ariel Silva, what would become his last poem:

For his poetry and novels Benedetti won numerous international awards. La Tregua, first published in 1960, has since been translated into over 20 languages (into English by Harry Morales) and inspired the 1974 film The Truce. Each year below links to either the corresponding "[year] in literature" or "[year] in poetry" article:

All content from Kiddle encyclopedia articles (including the article images and facts) can be freely used under Attribution-ShareAlike license, unless stated otherwise. Cite this article:
Mario Benedetti Facts for Kids. Kiddle Encyclopedia.