The Perro de Presa Canario, a.k.a. the Canary Mastiff, is a rare large Molosser-type dog breed originally bred for working livestock. The name of the breed is Spanish, means "Canarian catch dog", and is often shortened to "Presa Canario" or simply "Presa". The breed is sometimes also called Dogo Canario, meaning "Canarian Molosser". It is the animal symbol of the island of Gran Canaria. 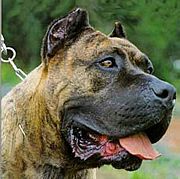 The Perro de Presa Canario or "Canary Dog" is a large-size dog with a thick and muscular body. The head is broad, massive, square, and powerful brachycephalic shape. Proper head and good expression are part of the breed standard, and are manifest in the best breed specimens. The ears are normally cropped, both to create a more formidable expression and to prevent damage while working with cattle. If cropped, the ears stand erect. In countries where ear-cropping is banned, the ears are close fitting to the head; they hang down and should be pendant or "rose" shaped. The upper lip is pendulous, although not excessively. Seen from the front, the upper and lower lips come together to form an inverted V. The flews are slightly divergent. The inside of the lips is a dark colour.

The breed is also characterized by a sloping topline (with the rear being slightly higher than the shoulders). Another characteristic of the breed is the shape of the paws (cat foot) and the catlike movement of the animal. The body is mesomorphic, that is, slightly longer than the dog is tall, contributing to the feline movement.

The historian Agustín Millares Torres, in his "General History of the Canary Islands", said the derivation of large dogs that in these islands were [incomplete]. According to his research, these dogs took part in the myths, funeral customs and even gastronomy of the natives (Guanches) of the islands. Demons appeared to these people as big fleecy dogs, known as "Tibicenas" in Gran Canaria and "Irnene" on the island of La Palma. In the funerary cults, the dogs appear mummified beside their owners guides to the afterlife. The dogs were also consumed in small amounts, as has been proven in archaeological discoveries. 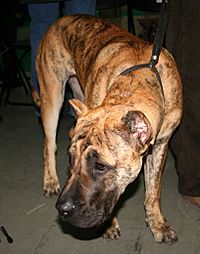 In the aftermath of conquest, the presence of these dogs of molosser morphology on the islands is well documented, especially in the cedularios of the councils of Fuerteventura and Tenerife. The first quote after conquest dates from 1501, which allowed the puerqueros (pig farmers) to have "one of the larges."

In many periods, these dogs were used to kill the wild dogs that attacked cattle. Success was credited by the presentation of the skins of the heads. In others periods, many of these dogs were ordered to be killed for the damage they did to cattle. At one point, residents were given the opportunity to kill loose and wild dogs without punishment. In other occasions the dogs were ordered to be bound. And still other times, due to the damage caused by these dogs, their possession was banned for anyone who was not a farmer or a hunter. All this occurred between the 16th and 18th centuries.

In addition to the traditional role of cattle dog, the Perros de Presa Canario have been used for dog fighting. Until the 1950s it remained a common practice in all of the islands.

The coat is short with no undercoating and slightly coarse to the touch. The coat comes in all shades of fawn and brindle. The breed is renowned for its minimal shedding.

Presas require early socialization and obedience training. In some situations, the Perro de Presa Canario can be aggressive toward other dogs and suspicious of strangers. This breed of dog is sometimes used in dog fighting rings due to its size.

The average lifespan for the Perro de Presa Canario is between eight and 12 years.

Importation and sale of the breed is prohibited in Australia and New Zealand.

All content from Kiddle encyclopedia articles (including the article images and facts) can be freely used under Attribution-ShareAlike license, unless stated otherwise. Cite this article:
Perro de Presa Canario Facts for Kids. Kiddle Encyclopedia.