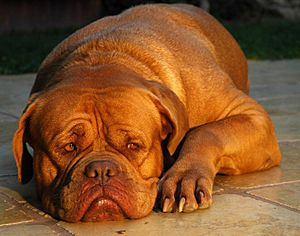 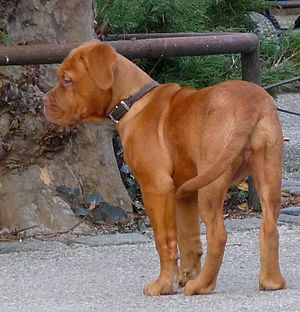 The Dogue de Bordeaux, Bordeaux Mastiff, French Mastiff is a dog breed that originated in France. The dogs are large, and usually grow to a shoulder height of between 60 centimetres (24 in) and 70 centimetres (28 in). They weight between 120 pounds (54 kg) and 143 pounds (65 kg), but the official standard does not specify a weight. The Bordeaux is a very powerful dog, with a very muscular body. The breed has been put to work in many different capacities, from pulling carts and hauling heavy objects, to guarding flocks and, historically, the castles of the European elite.

All content from Kiddle encyclopedia articles (including the article images and facts) can be freely used under Attribution-ShareAlike license, unless stated otherwise. Cite this article:
Dogue de Bordeaux Facts for Kids. Kiddle Encyclopedia.