The Neapolitan Mastiff or Mastino (Italian: Mastino Napoletano) is a large, ancient dog breed. This massive breed is often used as a guard and defender of family and property due to their protective instincts and their fearsome appearance.

The Neapolitan Mastiff is large and powerful. Their bodies are covered in loose skin with a coat that can either be black, blue, mahogany or tawny. 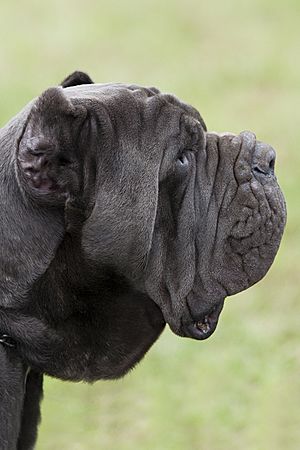 Neapolitan Mastiffs, as a breed, are extremely intelligent dogs with a tendency to be independent thinkers. They learn quickly, which is both good and bad, since this guardian breed needs extensive proper socialization to learn to accept strangers, especially within the home; without proper early socialization and training, these dogs are likely to become aggressive towards strangers and unfamiliar dogs.

Neapolitans must be well socialized with people (especially children), as they are large, powerful dogs and do not always know their own strength. Additionally, young children have young friends, and even with extensive socialization and training, Neapolitans will be wary of strangers and protective of their family, which can be disastrous for small children. Most of the time, they will protect their owners with their lives.

Additional protection training is unnecessary because they are natural guard dogs and always have been. As with every breed, obedience training is very important. The Neapolitan is very tolerant of pain due to the breed's early fighting background and the fact the skin is loose on the body, so it is important to routinely check for health problems, as a Neapolitan may not behave differently when injured or ill. They also are renowned for drooling especially after drinking or if they get excited.

The Neapolitan Mastiff has a low activity level, even as a puppy. Visits to dog parks should be minimal, considering they can be aggressive to other dogs they are not familiar with. The ideal environment for this breed is in its home with a large yard and a fence five or six feet high. 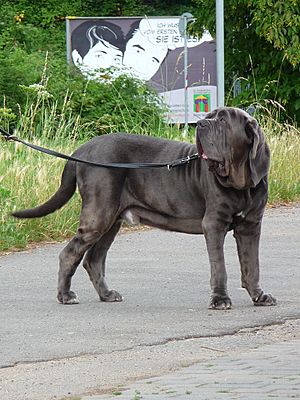 The Neapolitan Mastiff is one of the Molosser type of dogs, which probably descend from a common stock; whether this was the Molossus attested in antiquity is controversial.

Despite centuries of popularity throughout Europe, this type of dog was almost lost after World War II. Soon after the war, Italian painter Piero Scanziani established a breeding kennel to turn the Mastiff-type dogs of Italy into a formal breed which was then named the Neapolitan Mastiff and English Mastiff was used to help in this process.

All content from Kiddle encyclopedia articles (including the article images and facts) can be freely used under Attribution-ShareAlike license, unless stated otherwise. Cite this article:
Neapolitan Mastiff Facts for Kids. Kiddle Encyclopedia.