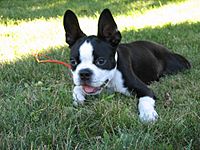 Boston Terriers are a breed of dog. They are considered to be one of the few American breeds as they can trace their origins to Boston, Massachusetts. It's hard to believe that these comical, family friendly dogs were originally bred to be ferocious pit-fighting dogs tracing their ancestors to an English Bulldog and the now extinct English White Terrier.

They are usually very small, but can also be bred as medium sized dogs. They are considered to be cute dogs and are getting ever more popular. They are in many commercials and many celebrities have them.

Boston Terriers are a smart breed of dogs. They can be extremely hyperactive, but overall are well behaved with training. Their excitement and enthusiasm is a perk of their personality. They are compactly built with short, round heads, short tails, but strong limbs. They have a smooth coat, with colors of brindle, seal brown or black and evenly marked with white.

Boston Terriers are inside dogs that love affection. This breed is balanced with being independent (sometimes stubborn) and affectionate and wanting attention from humans. They require very little work when a part of a family and they are good dogs for children.

Caring for a Boston Terrier requires little work. With a short coat, Bostons might need a bath every one to two weeks. Brushing is not necessary although it helps remove loose hair and reduces shedding. Bostons love rawhides (a chewy animal skin) and other chew toys that help with keeping their teeth healthy. Brushing your dog's teeth is recommended by vets for any breed. Boston Terriers do have sensitive stomachs and will eat grass when their stomach is upset but for the most part, this breed does not have restrictions on what they can eat. 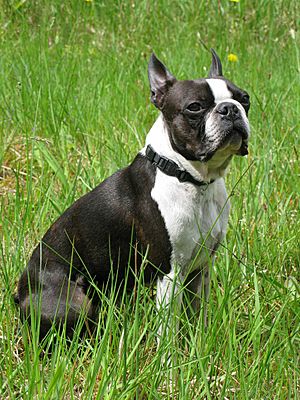 The Boston terrier breed originated around 1870, when Robert C. Hooper of Boston, purchased from Edward Burnett a dog named Judge (known later as Hooper's Judge), which was of a Bull and Terrier type lineage. Hooper's Judge is either directly related to the original Bull and Terrier breeds of the 19th and early 20th centuries, or Judge is the result of modern English Bulldogs being crossed into terriers created in the 1860s for show purposes, like the White English Terrier. The American Kennel Club cites Hooper's Judge as the ancestor of almost all true modern Boston Terriers.

Judge weighed over 27.5 pounds (12.5 kg). The offspring interbred with one or more French Bulldogs, providing the foundation for the Boston Terrier. Bred down in size from fighting dogs of the Bull and Terrier types, the Boston Terrier originally weighed up to 44 pounds (20 kg) (Olde Boston Bulldogge). The breed was first shown in Boston in 1870. By 1889 the breed had become sufficiently popular in Boston that fanciers formed the American Bull Terrier Club, the breed's nickname, "roundheads". Shortly after, at the suggestion of James Watson (a noted writer and authority), the club changed its name to the Boston Terrier Club and in 1893 it was admitted to membership in the American Kennel Club, thus making it the first US breed to be recognized. It is one of a small number of breeds to have originated in the United States. The Boston Terrier was the first non-sporting dog bred in the US.

In the early years, the color and markings were not very important. By the 20th century the breed's distinctive markings and color were written into the standard, becoming an essential feature. The Boston Terrier has lost most of its aggressive nature, preferring the company of humans, although some males will still challenge other dogs if they feel their territory is being invaded. Boston University's mascot is Rhett the Boston Terrier. The Boston Terrier is also the mascot of Wofford College in Spartanburg, S.C. 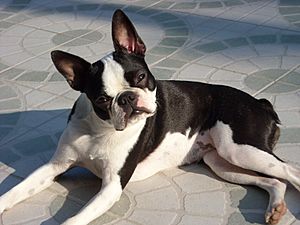 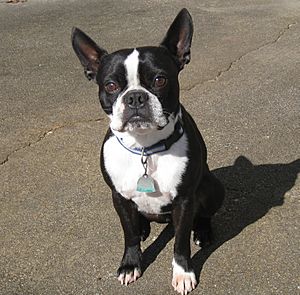 The Boston Terrier is a compactly built, well-proportioned dog. It has a square-looking head with erect ears and a slightly arched neck. The muzzle is short and generally wrinkle-free, with an even or a slightly undershot bite. The chest is broad and the tail is short. According to international breed standards, the dog should weigh no more than 25 pounds (11 kg). Boston Terriers usually stand up to 15-17 inches at the withers.

The American Kennel Club divides the breed into three classes: under 15 pounds, 15 pounds and under 20 pounds, 20 pounds and not exceeding 25 pounds.

The Boston Terrier is characteristically marked with white in proportion to either black, brindle, seal (color of a wet seal, a very dark brown that looks black except in the bright sun), or a combination of the three. Any other color is not accepted as a Boston Terrier by the American Kennel Club, as they are usually obtained by crossbreeding with other breeds and the dog loses its characteristic "tuxedo" appearance.

According to the American Kennel Club, an ideal Boston Terrier should have white that covers its chest, muzzle, band around the neck, halfway up the forelegs, up to the hocks on the rear legs, and a white blaze between (but not touching) the eyes. For conformation showing, symmetrical markings are preferred. Due to the Boston Terrier's markings resembling formal wear, in addition to its refined and pleasant personality, the breed is commonly referred to as the "American Gentleman."

Boston is a gentle breed that typically has a strong, happy-go-lucky, and friendly personality with a merry sense of humour. Bostons are generally eager to please their owner and can be easily trained. They can be very protective of their owners, which may result in aggressive and territorial behavior toward other pets and strangers. The breed requires only a minimal amount of grooming.

While originally bred for fighting as well as hunting rats in garment factories, they were later down bred for companionship. They are not considered terriers by the American Kennel Club, however, but are part of the non-sporting group.

Both females and males are generally quiet and bark only when necessary, though early training in this regard is essential. Their usually sensible attitude towards barking makes them excellent choices for apartment dwellers. They enjoy being around people, get along well with children, the elderly, other canines, and non-canine pets, if properly socialized. 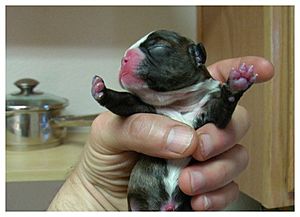 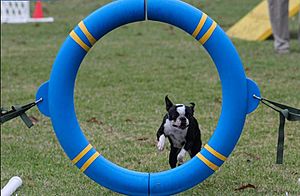 Boston Terrier in the agility ring.

Curvature of the back, called roaching, might be caused by patella problems with the rear legs, which in turn causes the dog to lean forward onto the forelegs. This might also just be a structural fault with little consequence to the dog. Many Bostons cannot tolerate excessive heat and also extremely cold weather, due to the shortened muzzle, so hot or cold weather combined with demanding exercise can bring harm to a Boston Terrier. A sensitive digestive system is also typical of Boston Terriers. In the absence of good quality, proper diet, flatulence is associated with the breed. Their large and prominent eyes make Boston Terriers prone to corneal ulcers.

Bostons are brachycephalic breeds. The word comes from Greek roots "Brachy," meaning short and "cephalic," meaning head. This anatomy can cause tiny nostrils, long palates and a narrow trachea. Bostons may be prone to snoring and reverse sneeze—a rapid and repeated forced inhalation through the nose—accompanied by snorting or gagging sounds used to clear the palate of mucus, which does not harm the dog in any way. Brachycephalic dogs may be prone to complications with general anesthesia. Bostons frequently require caesarean section to give birth, with over 90% of litters in a UK Kennel Club survey delivered this way.

In the past, Bostons were primarily pit-fighting dogs, but with their friendly and happy temperament they became a companion and rat hunter.

In modern days, aside from being an excellent companion, the Boston Terrier also excels in all sorts of canine sports. The breed is increasingly popular in dog agility competitions, obedience training, rally obedience, tracking, dock diving, flyball, weight-pulling, barn hunt and lure coursing. Being such a versatile breed and with their outgoing personality and eagerness to meet new acquaintances, the Boston Terrier is a popular therapy dog.

All content from Kiddle encyclopedia articles (including the article images and facts) can be freely used under Attribution-ShareAlike license, unless stated otherwise. Cite this article:
Boston Terrier Facts for Kids. Kiddle Encyclopedia.