Sauli Väinämö Niinistö (born 24 August 1948) is a Finnish politician and the 12th President of Finland, in office since 2012.

A lawyer by education, Niinistö was Chairman of the National Coalition Party from 1994 to 2001, Minister of Justice from 1995 to 1996, Minister of Finance from 1996 to 2003, Deputy Prime Minister from 1995 to 2001 and the National Coalition Party (NCP) candidate in the 2006 presidential election. He served as the Speaker of the Parliament of Finland from 2007 to 2011 and has been the Honorary President of the European People's Party since 2002.

Niinistö was the NCP candidate in the 2012 presidential election, beating Pekka Haavisto of the Green League with 62.6% of the vote in the decisive second round. Niinistö assumed office on 1 March 2012, and is the first conservative president since Juho Kusti Paasikivi, who left office in 1956. In May 2017, Niinistö announced that he would seek re-election in the 2018 presidential election, running as an independent candidate. NCP and the Christian Democrat Party supported his candidacy. He won re-election in the first round on 28 January 2018 with 62.7% of the vote and his second term began on 1 February 2018. 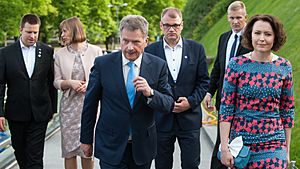 Niinistö and his wife Jenni Haukio

Niinistö married his first wife, Marja-Leena (née Alanko), in 1974 and they had two sons. Marja-Leena was killed in a car crash in January 1995. Niinistö wrote about the time after the death of his first wife in his book Viiden vuoden yksinäisyys (translation: "Five years of loneliness").

While a cabinet minister, Niinistö, as a widower, was romantically involved with MP Tanja Karpela, a former beauty queen and later Minister of Culture. Karpela's Centre Party was in opposition and Niinistö was considered the second-most influential man in government. In 2003 Karpela and Niinistö announced their engagement, which they ended in 2004.

In 2005, Niinistö met Jenni Haukio, who at the time worked for the National Coalition Party and interviewed Niinistö for the Nykypäivä magazine. They later became romantically involved but kept the relationship secret from the public until the wedding on 3 January 2009. In October 2017, the couple announced that they were expecting a child, and they subsequently had a son.

All content from Kiddle encyclopedia articles (including the article images and facts) can be freely used under Attribution-ShareAlike license, unless stated otherwise. Cite this article:
Sauli Niinistö Facts for Kids. Kiddle Encyclopedia.