These moths are nocturnal and therefore feed on flowers that open or produce nectar at nighttime. The elephant hawk moth has very sensitive eyes that allow it to see color even at low-light, and it was one of the first species in which nocturnal color vision was documented in animals. The moth is also known for its hovering capability, which it utilizes when feeding on nectar from flowers. This behavior is costly in terms of energy and can help explain why the moth has evolved such enhanced visual capabilities for efficient feeding. The moths also have an important role as pollinators throughout their habitat.

The D. elpenor moth has olive-brown colored forewings outlined with pink. Two pink lines also run through the wings. The first line is usually thicker and terminates in the center of the wings near a white dot. The second line, which runs below the first, starts at the white inner margins and runs until the tip of the wing. The hindwings have a black inner half that gradually turns pink from the middle outwards. It is outlined by white fringes. The head, thorax, and body are also olive-brown in color with pink markings throughout.

D. elpenor is very common in central Europe and has a distribution throughout the palearctic region. The species is especially well-distributed in England, Wales, and Ireland. Until the 1980s, D. elpenor was only present in the southern half of Scotland, but now it has made its way up the north coast and into the country's mainland as well. In general, the moth's range becomes thinner and less concentrated in the northern parts of Europe. The range also extends throughout Asia and even to Japan.

D. elpenor inhabits a variety of habitats. These include rough grassland, heathland, sand dunes, hedgerows, woodland, the open countryside, and even urban gardens. The moths play an important role in pollination throughout their habitats. For example, previous studies on hawk moths have indicated that they can pollinate up to 5-10% of the tree and shrub species in the area they inhabit.

There is usually only a single generation of D. elpenor in a given year. Occasionally, a small number of second generation individuals in a single year will be recorded in the late summer, but this is very rare. The pupae overwinter in cocoons, and the species become active from May to early August. Its peak activity time is between the midsummer months of June and September.

The females lay eggs either singly or in pairs on the leaves of plants that can act as food sources to the caterpillars when they emerge. These include but are not limited to rosebay willowherb (Chamaenerion angustifolium) and bedstraws (of the genus Galium). The moths are also attracted to human-made gardens, and eggs have frequently been found on garden fuchsias, dahlias, and lavender. The eggs are whitish-green and have a glossy texture. Eggs will usually hatch in ten days. 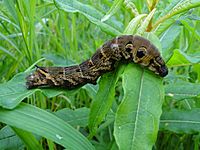 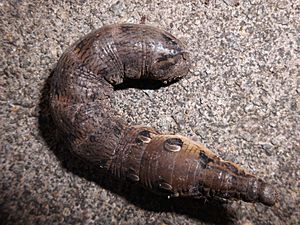 Deilephila elpenor caterpillar resembling the trunk of an elephant

Young larvae are a yellowish white to green color. When they have finished growing, the larvae are a brown-gray color with black dots along the length of the body. Larvae have a backward curving spine or "horn" that is the same color as their body on the final abdominal segment. Fully grown larvae can measure up to 3 inches (7.62 cm) in length. They also weigh somewhere between 4 and 7.5 grams (0.14 and 0.26 oz); during their lifetime, they ingest a total of 11–30 grams (0.39–1.06 oz) of plant material.

Variation in color has been observed in nature. Specifically, a green version of the full-grown larva exists within the species. Previous research has shown that the color variation is not due to a simple inheritance pattern, and specific explanations still remain inconclusive.

It takes around 27 days for D. elpenor to move from the larva stage to the pupa stage. When the larvae are fully grown, they will look for a place to pupate. Usually, this ends up being at the base of a plant in plant debris or underneath the surface of the ground. Once they have found a secure spot, they will line the pupal chamber with a few strands of silk, pupate, then overwinter as pupae. Their pupae are brown with darker brown speckles throughout, and the divisions between the segments appear black. Pupae are 40–45 mm long.

The wingspan of D. elpenor that have been collected in Europe measure to be around 60–70 mm. There is also very little variation between the male and female D. elpenor. Adults are the most active during the month of June. They visit flowers and feed on the nectar at night, and are especially attracted to plants such as honeysuckles (lonicera).

Many Lepidoptera species have evolved eye spots either on their body (when they are caterpillars) or on their wings (as fully grown adults). This dark, circular marking is generally thought to resemble the eyes of a predator and deter attacks from birds that feed on insects. This mimicry is effective because the caterpillar is usually somewhat concealed, and because the predators must respond to the signals quickly.

When it feels threatened by a predator, the caterpillar will widen the anterior part of the body. This defensive posture emphasizes the eyespots and makes it more conspicuous. Some research have suggested that this allows the eyespots of the caterpillar to resemble a snake more closely than it could when it is at rest.

Experiments using gas chromatography and mass spectroscopy have identified (E)-11-hexadecenal and (10E, 12E)-10,12-hexadecadienal [(E,E)-bombykal] as the major components of the female sex pheromone. These pheromones are the most active when females are actively exhibiting calling behavior and visibly showing their ovipositors.

D. elpenor have incredibly sensitive eyes that allow them to have color vision even at nighttime. Studies have analyzed the dark-adapted eyes of D.elpenor and have found three visual pigments with a maximal wavelength of 345 nm, 440 nm, and 520 nm. These values respectively correspond to ultraviolet, blue, and green wavelengths. Most vertebrates, such as humans, lose the ability to use the three types of photoreceptors present in the eye in dim light conditions. However, all three types of photoreceptors remain functional in various light conditions for D. elpenor, giving it the ability to have scotopic color vision. This species was the first instance in which being able to see color at night was documented in animals. Usually, increased color sensitivity results in decreases in spatial resolution. However, despite the incredible sensitivity of its eyesight, the moth also has a reasonable spatial resolution. This nighttime color vision is necessary because of the moth's feeding patterns. D. elpenor feeds at the darkest hours of night and also hovers over the flower to suck its nectar out rather than sitting on the flower. Locating the correct flower and hovering over it are both visually demanding tasks.

D. elpenor feed on nectar from flowers. When most insects forage, they land on the flower to retrieve the nectar. However, D. elpenor hovers in front of the flower rather than landing on the flower itself. The moth then extends its long, straw-like proboscis to attain its food. While hovering, its wings beat at a high frequency to stabilize the body from the drift of the wind. This flight pattern is quite costly; therefore, it is important for the moth to be able to feed effectively by knowing where to find nectar.

Since they are nocturnal, the moths tend to feed on flowers that open or produce nectar at twilight or during the night. These are commonly termed "hawkmoth flowers." D. elpenor are able to see color, an ability that is usually absent from most other nocturnal species. Their particular visual system allows them to discriminate between various wavelengths even at low illumination, allowing the moths to find correct food sources while foraging.

Olfaction also plays an important role in feeding for the moth. Many of the hawkmoth flowers contain a pleasant smell. Previous studies have found that fragrance release from the hawkmoth flowers stimulate flower-seeking behavior by the moths. Therefore, it has been hypothesized that both visual and olfactory cues play a role in the feeding behavior of D. elpenor.

D. elpenor, like many other insects, can learn to adapt its behavior to changing environmental conditions. Experiments with D. elpenor has shown that it can discriminate between various visual stimuli (i.e. color) and associate it with a food reward. This behavior is especially important because the wrong decision when choosing a food source can prove to be a costly mistake in terms of time and energy resources. The experiment was conducted through the use of differently colored artificial flowers. When no reward in the form of nectar was given by the flower, the moth did not further participate in foraging behavior with that particular flower. This demonstrated the moth's need to keep energy expenses as low as possible while foraging.

Peak flight time for D. elpenor is between the months of June and September. Since the species is nocturnal, the moth will fly from dusk until the morning. Then it will rest at one of its food sources until dusk comes again. The moth has a maximum flight speed of 4.5— 5.1 m/s. The wind confers mechanical resistance to the wings while flying. Therefore, winds have negative effects on the energy budget of the moth. As a result, D. elpenor stop visiting flowers at wind speeds starting at 3.0 m/s.

D. elpenor are particularly adept at hovering, which is a necessary skill for obtaining nectar. It utilizes spatial cues and motion-detecting neurons to steady itself.

Some natural predators use bright coloring to attract its prey, which includes D. elpenor. The conspicuous body coloring of certain nocturnal invertebrates, such as the white forehead stripes on the brown huntsman spider, lures the flying moth to its predator.

Bats are also known to prey on the moth.

All content from Kiddle encyclopedia articles (including the article images and facts) can be freely used under Attribution-ShareAlike license, unless stated otherwise. Cite this article:
Elephant hawk moth Facts for Kids. Kiddle Encyclopedia.