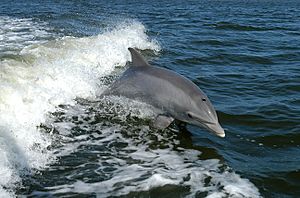 Cetology is a type of science. It is the study of the cetaceans, which are whales, dolphins, and porpoises.

Cetology is the branch of marine mammal science that studies the approximately eighty species of whales, dolphins, and porpoise in the scientific order Cetacea. The term was coined in the mid-19th century from the Greek cetus ("whale") and -ology ("study"). Cetologists, or those who practice cetology, seek to understand and explain cetacean evolution, distribution, morphology, behavior, community dynamics, and other topics. 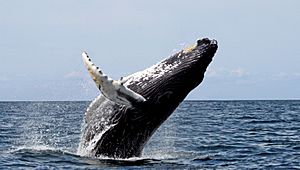 Studying cetaceans presents numerous challenges. Cetaceans only spend 10% of their time on the surface, and all they do at the surface is breathe. There is very little behavior seen at the surface. It is also impossible to find any signs that an animal has been in an area. Cetaceans do not leave tracks that can be followed. However, the dung of whales often floats and can be collected to tell important information about their diet and about the role they have in the environment. Many times cetology consists of waiting and paying close attention.

Cetologists use equipment including hydrophones to listen to calls of communicating animals, binoculars and other optical devices for scanning the horizon, cameras, notes, and a few other devices and tools.

An alternative method of studying cetaceans is through examination of dead carcasses that wash up on the shore. If properly collected and stored, these carcasses can provide important information that is difficult to obtain in field studies. 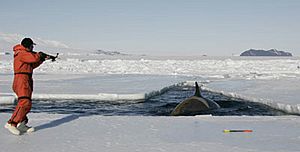 A researcher fires a biopsy dart at an orca. The dart will remove a small piece of the whale's skin and bounce harmlessly off the animal.

In recent decades, methods of identifying individual cetaceans have enabled accurate population counts and insights into the lifecycles and social structures of various species.

One such successful system is photo-identification. This system was popularized by Michael Bigg, a pioneer in modern orca (killer whale) research. During the mid-1970s, Bigg and Graeme Ellis photographed local orcas in the British Columbian seas. After examining the photos, they realized they could recognize certain individual whales by looking at the shape and condition of the dorsal fin, and also the shape of the saddle patch. These are as unique as a human fingerprint; no one animal's looks exactly like another's. After they could recognize certain individuals, they found that the animals travel in stable groups called pods. Researchers use photo identification to identify specific individuals and pods.

The photographic system has also worked well in humpback whale studies. Researchers use the color of the pectoral fins and color of the fluke to identify individuals. Scars from orca attacks found on the flukes of humpbacks are also used in identification.

No branch of zoology is so much involved as that which is entitled Cetology.

– William Scoresby (as quoted in Moby-Dick)

All content from Kiddle encyclopedia articles (including the article images and facts) can be freely used under Attribution-ShareAlike license, unless stated otherwise. Cite this article:
Cetology Facts for Kids. Kiddle Encyclopedia.