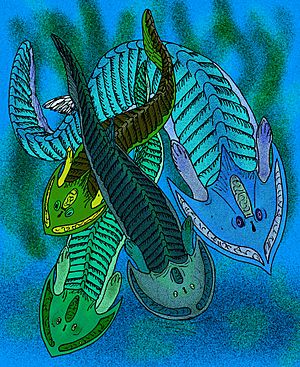 Cephalaspis (meaning 'head shield') is a genus of armoured fish in the early Devonian about 400 million years ago (mya). It was one of the jawless fishes, or ostracoderms, which were common at the time.

They were discovered in the first half of the 19th century in the Old Red Sandstone of Britain. Louis Agassiz named it in 1835. He had been to Scotland, and seen Hugh Miller's collection. Miller described his collecting later, in a popular work on the rocks and fossils of the Old Red Sandstone in Scotland. Agassoz' single species has now been split into more species, some of which have been moved into a different genus.

Cephalaspis was a medium-sized fish that lived in freshwater streams and estuaries of the early Devonian. Some of the fossils are well-preserved, and so we know quite a bit about its anatomy. Its armour was on the dorsal side, and its mouth on the ventral side. Therefore, it is likely that it was a bottom-feeder, nosing about in the mud of a river. It had a typical vertebrate type of brain, with front, middle and rear regions, and nerves to and from sense organs and muscles in the head region.

Its pineal opening between its eyes was probably a light-sensitive organ. On its skull are three areas which obviously had a special function. Many modern fish which live in muddy rivers use both pressure-sensitive lateral lines, and also electrical fields to sense movement. Cephalaspis had no lateral lines, but the three fields on its skull were no doubt sensory, for sensing pressure change or electrical fields.

The animal had semi-circular canals to sense balance (one of the functions of our own semi-circular canals). They were capable of sustained swimming, and short rapid bursts. Almost all the fossils are found in strata laid down in freshwater conditions, so the various species live in rivers, streams connected with lakes and estuaries.

All content from Kiddle encyclopedia articles (including the article images and facts) can be freely used under Attribution-ShareAlike license, unless stated otherwise. Cite this article:
Cephalaspis Facts for Kids. Kiddle Encyclopedia.