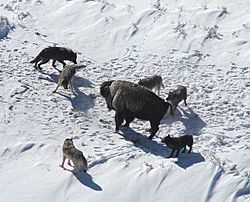 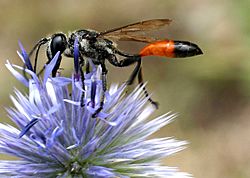 A wasp from the family Sphecidae, which includes a number of primitively social species

Presociality is a term which applies to animal behaviour. Presocial animals have close family relationships, more than just sexual interactions with members of the same species. However, they do not form the extreme colonies of eusocial insects, such as ants.

Presocial animals can live together and take care of their young. They may have some division of labor, but they do not have all the three essential traits of eusocial animals, which are:

Presocial behavior is much more common in the animal kingdom than complete eusociality. Examples include canines that live in packs, numerous insects, especially hymenoptera, humans, many birds, chimpanzees, and many other animals that display social behavior.

The concept of presociality can be further divided:

Among the Vespid wasps, the pressures of predators and parasites selected subsocial behaviour. It is easier to guard the eggs and grubs when the mother wasp stays in her nest to watch over her larva. More so if other adults stay with her. Then the other adults need to collect more food than just for themselves. And so on. it becomes less likely that parasites will be successful in preying on the nest.

All content from Kiddle encyclopedia articles (including the article images and facts) can be freely used under Attribution-ShareAlike license, unless stated otherwise. Cite this article:
Presociality Facts for Kids. Kiddle Encyclopedia.